American defence officials claim several Islamic State (IS) leaders have been killed in US air strikes in northern Iraq in recent weeks. 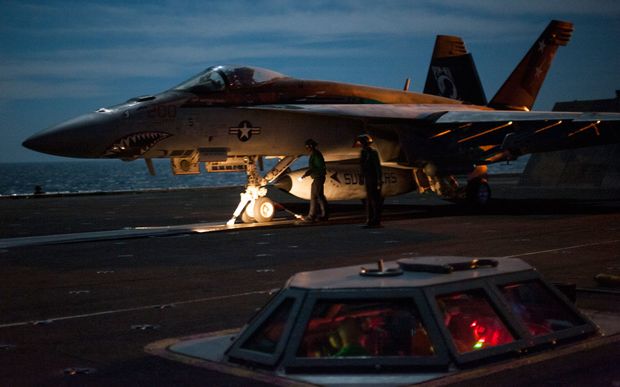 A US F/A-18E Super Hornet - shown on the flight deck of an aircraft carrier supporting strikes in Iraq and Syria. Photo: AFP / US Navy / MC2 John Philip Wagner Jr

The officials said the air strikes had been targeting IS command and control nodes to degrade the group's ability to lead their forces.

The most significant figure was identified as Haji Mutazz, better known as Abu Muslim al-Turkmani, who was a deputy to IS chief Abu Bakr al-Baghdadi.

Officials said a second senior militant, referred to as Abd al Basit, was also killed and was believed to have been overseeing the group's military operations.

A third militant, known as Radwin Talib and described as a "mid-level" figure overseeing the captured city of Mosul, was killed at some point after mid-September, officials said.

The strikes against the senior figures came as Kurdish forces made gains against IS militants around Sinjar near the border with Syria.

Kurdish forces said they had broken a siege of Mount Sinjar, freeing thousands of people who had been trapped for months by IS.

The capture of Sinjar in August by IS jihadists - and their persecution of the Yazidi minority population - was cited by US President Barack Obama as one of the reasons for that country's military intervention in the conflict.

The US launched air strikes against IS on 8 August in Iraq and expanded the raids to Syria on 23 September. A coalition of Western and Arab countries has joined the US-led air campaign.