Japanese prime minister Shinzo Abe's ruling coalition has cruised to a big election win, but poor turnout could weaken his claim of a mandate for policies including reflationary steps to revive the economy, the ABC reported. 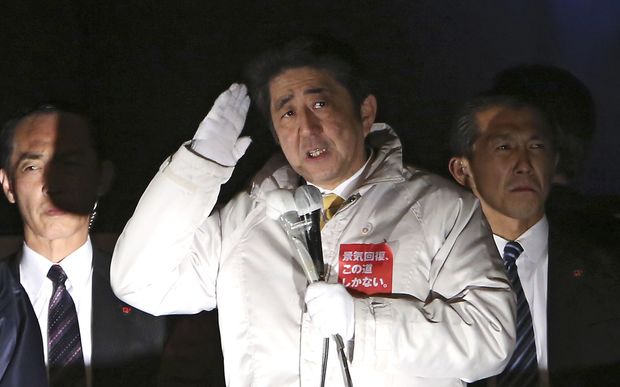 The LDP will govern with the Buddhist-backed Komeito party after the parties won 325 seats out of 475.

Mr Abe had called the snap vote to secure support for his "Abenomics" economic reforms.

It said the main opposition party, the Democratic Party of Japan, won 73 seats, an increase of 11.

Mr Abe was elected in 2012 and has since tried to revive the economy by raising public spending and printing money.

After an initial burst of growth, Japan slipped back into recession in the second half of this year, which many economists have blamed, at least in part, on an increase in sales tax, from 5 percent to 8 percent in April.

Mr Abe decided last month to put off a second tax hike to 10 per cent until April 2017, raising concerns about how Japan will curb its huge public debt, the worst among advanced nations.

Japan is the third-largest economy in the world, according to the World Bank, but it has struggled in recent years.

The US hopes Mr Abe will be able to expand Japan's military role, so that it can play a bigger part in their alliance. That challenge to Japan's constitutional pacifism - traditionally opposed by Komeito - is expected to lead to heated debate in 2015.

Reports said turnout at polling stations was low due to voter apathy and heavy snowfall in parts of the country. The government said turnout was at just 35 percent, two hours before polls closed.