A Taliban bomb has killed two US soldiers in a NATO convoy near the US Bagram Airfield base north of the Afghan capital Kabul. 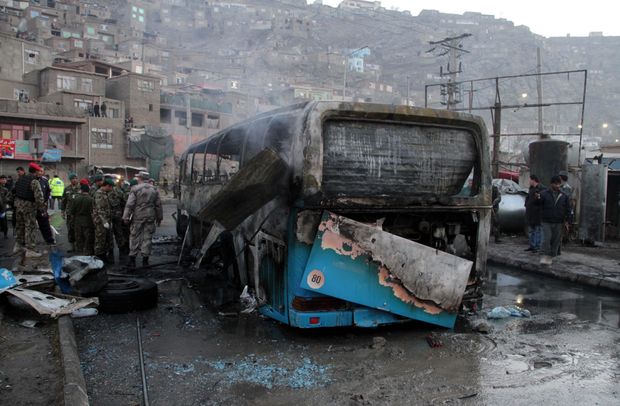 Afghan security personnel inspect a damaged bus at the site of a suicide attack by the Taliban in Kabul, Afghanistan. Photo: AFP

The coalition, as per its policy, has declined to give the soldiers' nationality but a US defence official in Washington has confirmed the victims were American.

In a day of gun and suicide attacks in Afghanistan, Taliban insurgents have killed at least 19 people.

Among them were 12 people working to clear unexploded landmines in the southern province of Helmand, who were gunned down by militants on motorbikes .

Nato's war against the Taliban officially ends on 31 December, after 13 years of fighting.

Meanwhile, Iran has agreed to extend temporary visas for 450,000 Afghan refugees for six months, lifting a threat to send them back to their war-torn country .

Afghanistan this month asked its neighbour not to expel the refugees, who do not have the right documents, because it is struggling to cope with hundreds of thousands left homeless inside its own borders .

The UN expects 765,000 people displaced inside Afghanistan to need its help by next month