A Madrid judge has ordered US-based online car booking company Uber to cease operations in Spain, the latest ban on the popular service. 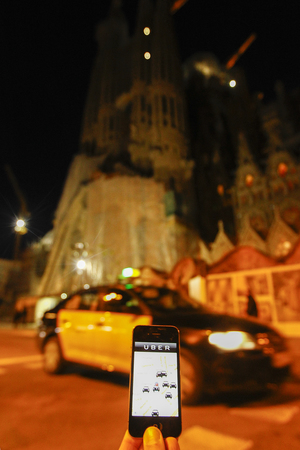 Taxi drivers around the world consider Uber unfairly bypasses local licensing and safety regulations by using the internet to put drivers in touch with passengers.

The Madrid judge this week imposed an injunction on services after a request by the Madrid Taxi Association, which is preparing a legal case against Uber accusing it of unfair competition.

The decision came the same day as a court in India ordered state governments to halt the operations of all unregistered, web-based taxi companies after a woman said she was raped by a driver working for Uber.

Revelations that the accused New Delhi driver was on bail after being charged with assault, robbery and rape have been a further blow to the US-based service, already under fire for failing to carry out adequate background checks on its drivers.

The company also faces legal action in several European countries including Germany and has regulatory problems which prevent it from operating in US cities such as Las Vegas and Miami.

Uber began with a low-cost, limousine pick-up service called UberBlack and then introduced UberPop, a ride-sharing services that links private drivers with passengers, and its latest service UberTaxi, which uses regular taxi drivers to pick up rides.

Taxi companies in New Zealand say Uber, now being used in Auckland, Wellington and other centres, could damage taxi services by undercutting registered firms obliged to comply with regulations and pay for round-the-clock operations, and they might struggle to compete.

Dutch judges have banned the ride-sharing UberPOP service from taking bookings via its smartphone app, threatening the US company with fines of up to €100,000, AFP reports.

A court on Monday ordered Uber to stop its UberPOP service, which allows non-professional drivers to register with Uber via a mobile phone and offer trips in their own cars at half the price of a regular cab.

UberPOP is one of several services offered by the online taxi startup, which appealed against a Dutch government decision in September to have it banned.

Uber said that it was merely offering a "car-sharing service" but the judges sided with government on Monday, pointing out that Uber receives a 20 percent commission for each trip.

Uber launched UberPOP as a pilot project in Amsterdam between July and September, and extended the service to The Hague and Rotterdam last week.

Uber has expanded at breakneck speed since it launched in 2009 and is now present in more than 200 cities across 45 countries.

But its rapid growth has caused tensions, especially in Europe where rival taxi companies have protested that Uber cars are not subject to the same regulations.