Tens of thousands of people have sought shelter as a powerful typhoon heads towards the Philippines, where thousands were killed in a devastating storm last year. 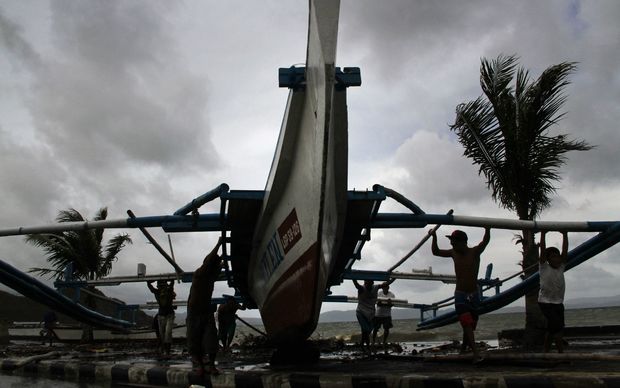 Fishermen carry an outrigger to higher ground in Legazpi City, south of Manila, ahead of the landfall of Typhoon Hagupit. Photo: AFP

Typhoon Hagupit, known locally as Ruby, has gusts of up to 230 kilometres per hour and is due to hit land tonight, the BBC reported.

The storm is on course for the provinces of Eastern and Northern Samar and the city of Tacloban, where thousands were killed by Typhoon Haiyan in November 2013.

Local residents, many of them still living in temporary shelters, are moving away from coastal areas. Ports are shut across the archipelago, leaving thousands of travellers stranded, and some local airlines have cancelled flights to the central and southern Philippines.

President Benigno Aquino has ordered food supplies to be sent to affected areas, as well as military troops and police officers to be deployed to prevent looting in the aftermath.

Local media reported Mr Aquino as saying there was "no indication" for now that Hagupit would be as strong as Haiyan.

Save The Children Deputy Country Director Michel Rooijackers said yesterday that evacuations from towns and villages in the path of the new storm were underway.

"A lot of the death toll from last year was caused by people not understanding what storm surges mean. Evacuation messages did not go through," he said.

"So now we are ensuring that as soon as the evacuation call is made, they evacuate."

Haiyan - known as Yolanda in the Philippines - was the most powerful typhoon ever recorded over land. It left more than 7000 people dead or missing and more than four million homeless.

While Hagupit was yesterday downgraded to category 4, which is a level below "super typhoon", it remains the strongest storm to hit the Philippines in 2014.