Three men charged over a massive drug bust where police uncovered almost three tonnes of narcotics remain behind bars after appearing before a Sydney court. 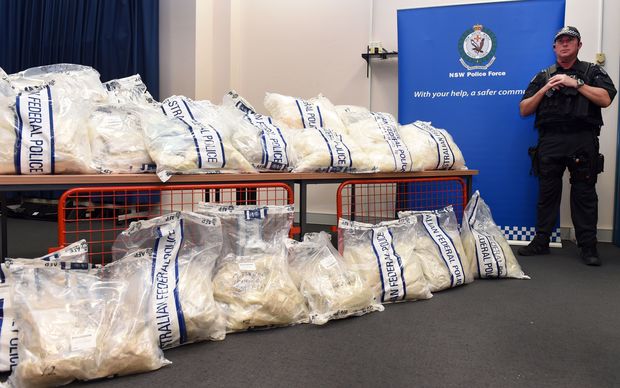 An Australian Federal Police officer stands guard over some of the seized drugs. Photo: AFP

The trio are among six men accused of importing $A1.5 billion of ecstasy, speed and ice into Australia from Germany.

Court documents revealed police raided the Smithfield factory yesterday, where the men were unpacking parcels unaware the drugs had been replaced with fake inert substances by investigating officers.

Police have described the haul as the nation's second-largest drug bust, reports the ABC.

About 2.8 tonnes of illicit drugs were seized, including 1,917 kilograms of MDMA and 849 kilograms of methamphetamine.

Police yesterday said the narcotics were concealed with furniture.

The three men, all aged 34, faced court via video link and did not apply for bail.

They will remain in custody, along with the other three men charged, until a court appearance on Wednesday.