Police in Sydney have arrested six men after seizing $NZ1.6 billion dollars worth of drugs - the second largest consignment of drugs ever seized in Australia. 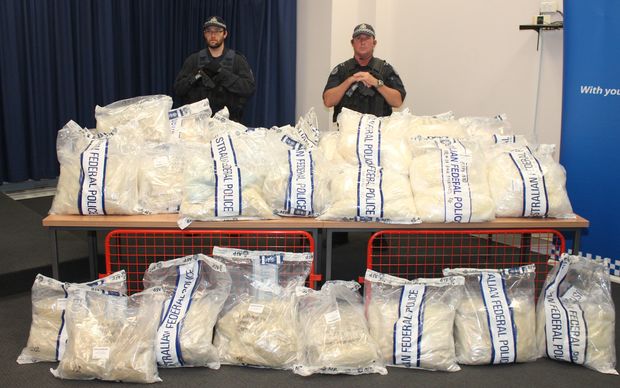 About 2.8 tonnes of illicit drugs were found in a container of furniture shipped from Germany, including 1917 kilograms of MDMA and 849 kilograms of methamphetamine.

Police will allege the consignment originated in Europe before arriving in Australia earlier this month, the ABC reported.

Commissioner Colvin said it was the largest Australian seizure of methamphetamine and the second largest of MDMA.

"By any measure this is an enormous seizure of illicit narcotics that have been removed from distribution on our streets."

He said the MDMA was in various forms, but mostly powder.

"We have to presume at some point it would be pressed into pills. I understand there are also some pills in that."

Search warrants were being executed across New South Wales and Commissioner Colvin said the AFP were hopeful of further arrests.

He said it was a sophisticated, controlled operation and police managed the delivery of the narcotics to try to identify as many of the people involved as possible.

Police were also working closely with the German federal police and Interpol.