A Canadian soldier has been killed in a Quebec town by a suspected Islamic militant.

It's the first fatal attack on Canadian soil involving Islamic militants, and the first since Canada joined the fight against Islamic State (IS).

Martin Couture Rouleau, 25, deliberately ran over two soldiers with his car in the town of Saint-Jean-sur-Richelieu yesterday, killing one of them, and was shot dead by the police shortly afterwards. 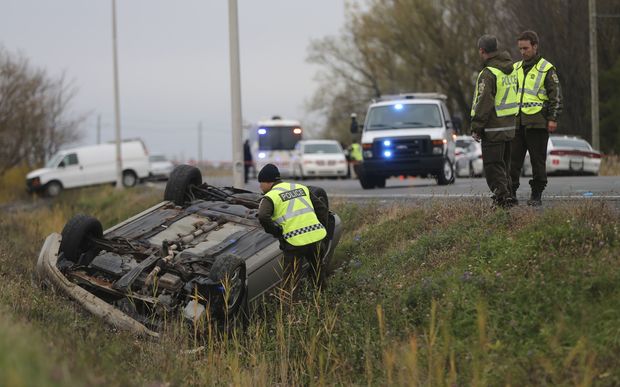 Two Canadian soldiers were injured in a hit-and-run in the province of Quebec on Monday by a male driver who was later shot by police. Photo: Reuters

The office of the prime minister, Stephen Harper, said Rouleau was one of 90 militants being tracked prior to his death.

Public Safety Minister Steven Blaney labelled the attack a "terrible act of violence against our country".

Royal Canadian Mounted Police Commissioner Bob Paulson said authorities had been tracking the group -including Rouleau - because they may intend to go abroad to join militant groups.

A large knife was found on the ground near the crashed car. Rouleau was taken to hospital where he died some hours later.

The family of the dead soldier has requested that his name not be released.