Nigeria's military says it has agreed a ceasefire with Islamist militants Boko Haram and that the schoolgirls the group has abducted will be released. 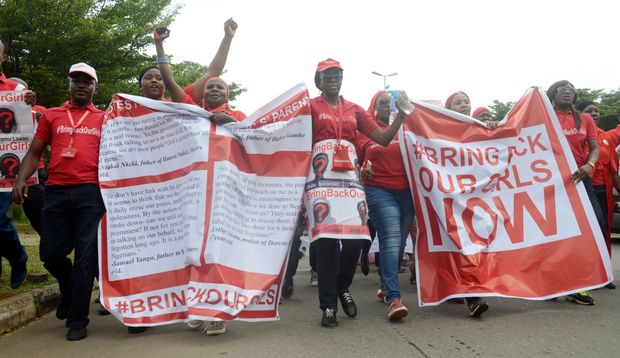 Supporters of the Bring Back Our Girls campaign march in Abuja, Nigeria, for the release of the schoolgirls kidnapped by Boko Haram. Photo: AFP

Nigeria's chief of defence staff, Alex Badeh, announced the truce, the BBC reported. Boko Haram has not made a public statement.

The group has been fighting an insurgency since 2009, with some 2000 civilians reportedly killed this year.

The girls were seized in the north-eastern town of Chibok in Borno state, and their continued captivity has led to criticism of the Nigerian government's efforts to secure their release.

Members of the Bring Back Our Girls campaign said in a tweet on Friday: "We are monitoring the news with huge expectations."

Air Chief Marshal Badeh revealed the truce at the close of a three-day security meeting between Nigeria and Cameroon. He said Nigerian soldiers would comply with the agreement.

Nigerian presidential aide Hassan Tukur told BBC Focus on Africa that the agreement was sealed after a month of negotiations, mediated by Chad.

As part of the talks, a government delegation twice met representatives of the Islamist group.

Mr Tukur said Boko Haram had announced a unilateral ceasefire on Thursday and the government had responded.

"They've assured us they have the girls and they will release them," he said.

"I am cautiously optimistic."

He said arrangements for their release would be finalised at another meeting next week in Chad's capital, Ndjamena.