The World Health Organisation (WHO) says just over 4000 people have now died from Ebola, almost all of them in West Africa. 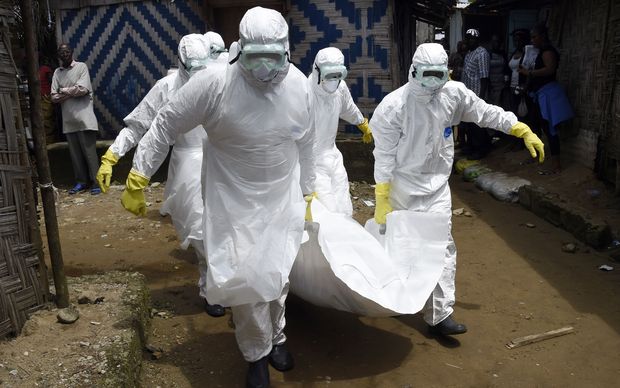 Red Cross workers carry the body of a person suspected of dying from Ebola in the Liberian capital Monrovia. Photo: AFP

WHO officials said in the three worst-affected countries - Guinea, Liberia and Sierra Leone - the number of cases is accelerating despite an escalation of international support in recent weeks, the BBC reported.

The latest figures show there have been 4024 confirmed or suspected deaths in Guinea, Liberia and Sierra Leone.

Eight deaths are linked to the haemorrhagic fever in Senegal and one in the United States.

In total, there have been 8399 confirmed or suspected cases, mostly in West Africa.

The United Nations (UN) special envoy on Ebola, David Nabarro, told the UN General Assembly in New York that without the mass mobilisation of almost every country, the world may have to live with the disease forever.

"I've never encountered a challenge like this one. This outbreak has moved out of rural areas. It's no longer just affecting a very defined geographical location. It's affecting a whole region and it's now also impacting on the whole world."

The news comes as Liberian lawmakers refused to grant the country's president additional powers to deal with the Ebola crisis.

President Ellen Johnson Sirleaf has already declared a state of emergency that allows her to impose quarantines.

One parliamentarian, Bhofal Chambers, warned that creeping extra powers could turn Liberia into a "police state".

The UN says more than 233 health workers working in West Africa have now died in the outbreak, the world's deadliest to date.

A nurse in Spain is being treated for the virus after becoming infected from an Ebola patient who had been repatriated from Liberia - the country most badly hit by the disease with 2316 confirmed or suspected deaths.

Teresa Romero is said to be gravely ill but stable, and is being treated in a hospital in Madrid.

Spanish Prime Minister Mariano Rajoy on Friday set up a special committee to deal with the impact of Europe's first case of Ebola.

He admitted that the situation was "complex and difficult" but stressed that the government had a clear plan for what needed to be done.

Seven more people in Spain are being monitored in hospital for suspected Ebola, including two hairdressers who came into contact with Ms Romero.