China has issued a veiled warning to other countries not to support pro-democracy protests in Hong Kong, as tens of thousands of demonstrators ignore appeals to leave. 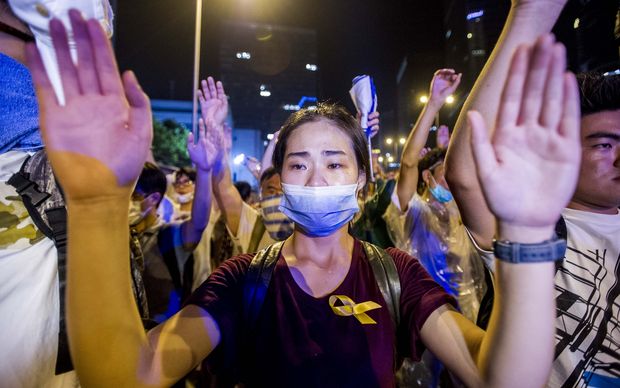 Pro-democracy protesters are blocking Hong Kong's streets, shutting down its business district. The demonstrations have spread to other areas including a shopping district and a residential area.

Riot police withdrew on Monday after overnight clashes in which they used batons and fired volleys of tear gas to try to disperse the crowds.

Beijing has said it will not tolerate external support for what it calls illegal movements. 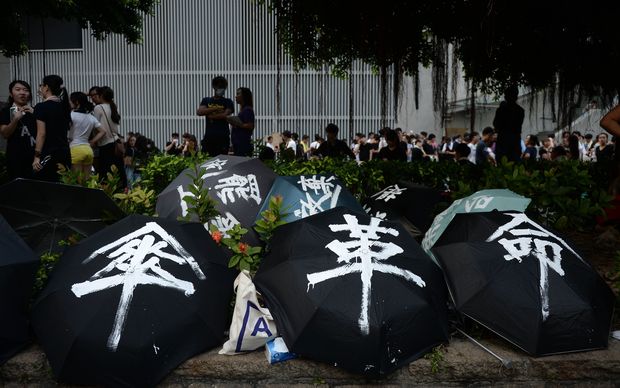 The mostly student protesters are demanding full democracy and have called on the city's leader Leung Chun-ying to step down.

Angry at Beijing's plans to vet candidates for Hong Kong's 2017 leadership elections, they have called for a free choice of candidates when they cast their ballots for the chief executive - something Beijing says is out of the question.

China rules Hong Kong under a "one country, two systems" formula that gives the territory only a degree of democracy.

East Asia analyst Rob Wye, formerly with Britain's Foreign and Commonwealth Office, told Morning Report that whatever the outcome of the protests, the fundamental problem - the relationship betweeen China and Hong Kong - will not go away.

As riot police withdrew on Monday, protesters slept beside roads or sheltered from the sun beneath umbrellas, which have become a symbol of what some are calling the "Umbrella Revolution".

In addition to protection from the elements, umbrellas have been used as flimsy shields against pepper spray.

Erin Hale, a Hong Kong-based freelance journalist who writes for The Guardian, told Nine to Noon that the atmosphere in Hong Kong is calmer than yesterday.

"It seemed like today they reversed their tactic, and they are de-escalating it. Something to bear in mind is that in Beijing, the higher powers do not want to see this protest be successful. Because it could greenlight other issues in China, there are other restive areas and so I think the stakes are very high." 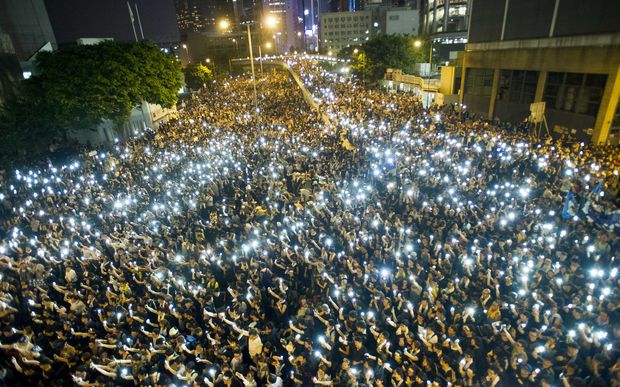 Protesters hold up mobile phones in a display of solidarity - but communications are disrupted. Photo: AFP

The Chinese government has apparently been taking steps to limit information about events in Hong Kong.

Mobile phone networks have been disrupted and internet search terms and forum discussions have been censored.

Chinese websites, including Baidu Inc's search engine and the Twitter-like Weibo Corp microblog, have set about deleting references to the Hong Kong demonstrations.

The protests have no single identifiable leader and bring together a mass movement of mostly tech-savvy students who have grown up with freedoms not enjoyed in mainland China.

The movement represents one of the biggest threats for Beijing's Communist Party leadership since its bloody 1989 crackdown on pro-democracy student protests in and around Tiananmen Square, Reuters reports.