Pro-democracy protests in Hong Kong which began on Friday, are spreading.

Police have been using tear gas to try and disperse thousands of people who are occupying areas near the government buildings complex. 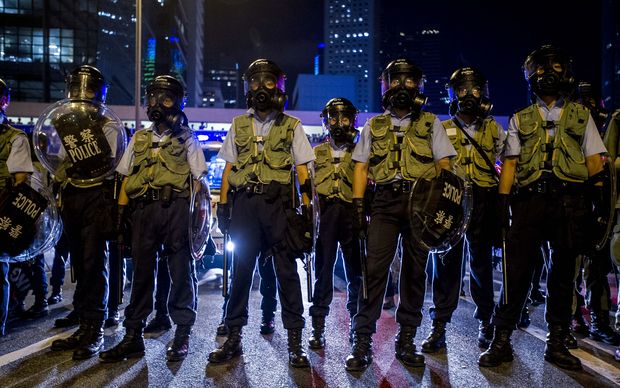 And a second flashpoint area has now opened up across the harbour, in a busy financial district where the BBC reports police are considering using rubber bullets.

Dozens of demonstrators have been arrested, with hundreds remaining in the city centre late on Sunday.

Martin Lee, a pro-democracy leader, described being tear gassed as thousands of demonstrators gathered last night. Mr Lee told Radio New Zealand he was one of the first to be hit.

Protesters want the Chinese government to scrap rules allowing it to vet Hong Kong's top leader in the 2017 poll.

Hong Kong chief executive CY Leung said the demonstration was "illegal" and elections would go ahead as planned.

China has also condemned the protest, and offered "its strong backing" to the Hong Kong government.

The broader Occupy Central protest movement threw its weight behind the student-led protests on Sunday, bringing forward a mass civil disobedience campaign due to start on Wednesday.

Protesters blocked a busy thoroughfare that runs through the heart of Hong Kong's financial district on Sunday, clashing with police as they tried to join a mass sit-in outside government headquarters.

Police used pepper spray and repeatedly shot tear gas into the air to drive back the protesters from the busy Connaught Road. Protesters used umbrellas and face masks to defend themselves. 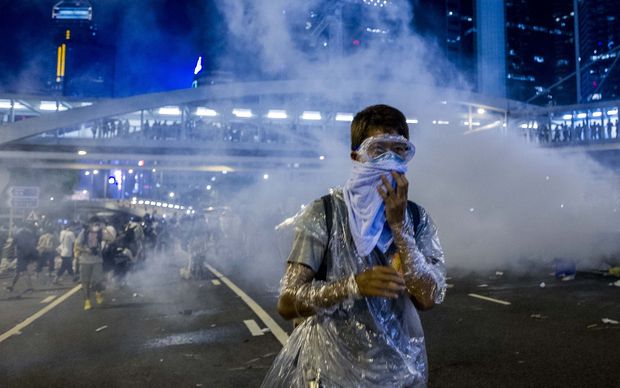 The student organisers behind the protest, the Hong Kong Federation of Students, have appealed for students to retreat due to fears that police could use rubber bullets to disperse the crowd.

Unrest began when the Chinese government announced that candidates for the 2017 chief executive election would first have to be approved by a nominating committee.

Activists have argued that this does not amount to true democracy.