Firefighters are trying to stop the blaze reaching more than 12,000 homes. 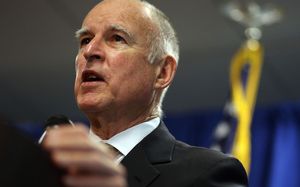 Thousands of people are fleeing their homes in drought-wracked northern California after a wildfire burning out of control doubled in size in just 12 hours.

Firefighters are trying to stop the blaze reaching more than 12,000 homes on Thursday, the BBC reports.

California governor Jerry Brown has declared a state of emergency in the area to the north-east of the state capital Sacremento where the 'king fire' is burning out of control through brush parched by three years of drought in warm, windy weather.

Three thousand people had to leave their homes at short notice, grabbing what they could as the fire's leading edge advanced through the forest.

A 37-year-old man has been arrested on suspicion of arson and his bail set at $US10 million. State officials said this was on track to be the worst wildfire season on record.