On the final day of campaigning before the independence referendum in Scotland, both sides have made emotional appeals to voters. 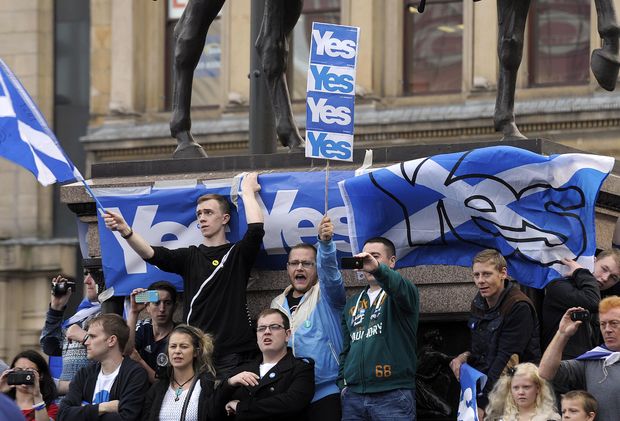 The BBC reported about 2,000 independence supporters attended a mass event in the centre of Glasgow, where they were urged to "vote 'Yes' for a prosperous Scotland".

Scottish First Minister and leader of the pro-independence campaign Alex Salmond said it is time for Scots to take their destiny into their own hands.

He also asked voters to step back from the political arguments and statistics that have defined the two-year campaign and trust in themselves as they go into the polling booth.

Mr Salmond said: "The talking is nearly done. The campaigns will have had their say. What's left is just us - the people who live and work here. The only people with a vote. The people who matter."

At the same time, pro-UK campaigners gathered nearby to insist the case for independence had not been made.

Better Together head Alistair Darling urged anyone who had doubts about independence to vote "No".

Addressing supporters alongside former Prime Minister Gordon Brown at a Love Scotland, Vote No rally, he said: "If you have such a momentous decision to take, you need to have certainty.

"What is very clear at the end of this long campaign, from the nationalist side there is no certainty at all. For anyone in Scotland who has any doubt, be in no doubt - you have to say 'No'," he said.

Recent polls indicate the outcome of the referendum is too close to call.