Pope Francis has presided over the marriage of 20 couples at the Vatican, including some who were cohabiting, one of which has a child and another who was divorced. 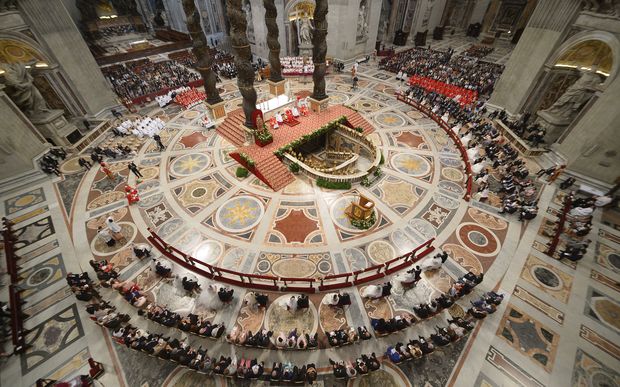 Brides and grooms during their wedding ceremony at St Peter's Basilica. Photo: AFP

Pope Francis had asked to marry 40 people from different social backgrounds who represented modern couples, the BBC reported. It was the first papal marriage ceremony of its kind in 14 years.

The Pope has expressed greater tolerance than his predecessor on many issues, including family values.

Sunday's ceremony, at St Peter's Basilica in Rome, comes three weeks before a meeting of Catholic bishops from around the world to examine church teachings on family matters.

One of the couples married was a man whose previous marriage was annulled and a single mother with a daughter from a previous relationship.

Pope Francis told the couples at the two-hour ceremony that marriage was "not an easy road, it's sometimes a contentious trip, but that's life", AFP news agency reports.

Very slowly, the church under the guidance of Pope Francis is facing the fact that many Catholic couples cohabit before marriage, use contraception freely and divorce and remarry without seeking an annulment, the BBC's David Willey said in Rome.

Pope Francis said in his homily that families were "bricks that build society", but also believed that the church should forgive those who had sex outside marriage or who did not obey church teaching to the letter.

It was the first marriage Pope Francis has conducted in his 18-month papacy. The last wedding to be presided over by a pope took place under John Paul II in 2000.

The world's clergy will gather in Rome in October to discuss issues such as marriage, divorce and contraception.

They are expected to discuss the results of a worldwide survey launched by the Vatican last year to find out what Catholics really think about its teaching on marriage and family life.