Police in Fiji say they will not tolerate any breach of the law in the run-up to the elections on Wednesday. 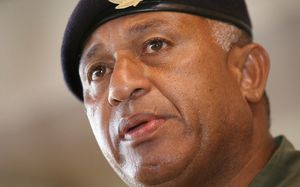 The first election in the Pacific nation in eight years is being run according to a decree issued earlier this year, which includes a 48-hour blackout on any political activity including on social media.

The Commissioner of Police said he would not hesitate to request the assistance of the Fiji Military Forces, if necessary, to assist in maintaining law and order.

The Supervisor of Elections, Mohammed Saneem, said people need to respect the blackout and offenders could face a fine of up to $F50,000 or a jail term of up to 10 years.

Media owners or publishers who breach the blackout rules could face up to five years in jail.

Campaigning has finished, with parties having to ensure that all posters, signs and banners were taken down last night.

There has been a good turn out in early voting in Fiji's election. The elections office said 77 percent of those who could vote in pre-polling have taken part.

Parties accused of being divisive

The campaign has involved parties accusing each other of scaremongering, with military leader Frank Bainimarama's party Fiji First saying some opposing parties in the elections are behaving in the divisive way of the past.

Mr Sayed-Khaiyum also blamed other parties for activities such as the slashing of banners and posters, and vandalism of cars, which has been ongoing.

"This is the kind of sort of thuggery that an alternative government is involved in and that's the type of Fiji they actually want to have, where people will need to live in fear, people will need to be divided along communal lines etc, so just so a handful of people can win seats in Parliament."

However, National Federation Party leader Biman Prasad rejected any idea of unrest after the election result.

"I don't believe that there will be any instability. In fact, we have had instability in the last seven and-a-half years - fear, intimidation, abuse of office, lack of transparency (and) accountability. That's instability."

Voting takes place on Wednesday and an indication of the outcome is expected later that evening.