The leader of Fiji's indigenous-backed Sodelpa party Ro Teimumu Kepa has told Frank Bainimarama he will get his just deserts if immunity for coup-makers is lifted by parliament after the election.

"My question is why are you asking for immunity when under this constitution you are talking about equal citizenry for everyone," she asked.

Mr Bainimarama said the military needed protection for what needed to be done in Fiji after the George Speight-led coup of 2000.

He described them as brave soldiers who stood up against racial discrimination and turned Fiji around.

"I need that to protect my soldiers'" he said.

He challenged Ro Teimumu on whether she would remove the constitution's immunity clause if she came to power.

Ro Teimumu said SODELPA would work within the parliamentary process under the 2013 constitution. 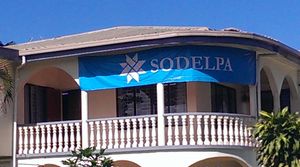 The debate which was broadcast live was eagerly anticipated in Fiji as the country heads towards its first polls since the Bainimarama-led 2006 military coup.

SODELPA which rose out of the ashes of the former SDL party ousted from power has been gaining in the polls to challenge the huge popularity of Mr Bainimarama's FijiFirst party.

Rear Admiral Bainimarama accused Ro Teimumu of being confused and heading a party which would bring in discriminatory policies and that had lied to people in rural areas.

The SODELPA leader said the prime minister was throwing mud at her party and she accused him of betraying Fiji's indigenous population by systematically dismantling indigenous structures.

Both party leaders said they would not be able to work with each other in a coalition and Mr Bainimarama reiterated he would get a clean sweep of the 50 seats on offer in Fiji's new look parliament.