British Prime Minister David Cameron has described the killing of David Haines as an "act of pure evil", after the release of a video purporting to show the UK hostage's beheading.

Mr Cameron said his government pledges to do "everything in our power to hunt down" the killers of the aid worker, from the Scottish city of Perth, who was kidnapped last year in Syria.

The 44-year-old aid worker was kidnapped last year in Syria.

Islamic State (IS) militants have already beheaded two American journalists and had threatened to kill Mr Haines if United States air strikes in Iraq were not halted.

The latest video also includes a threat to kill a second British hostage. Mr Cameron said the murder was "despicable and appalling".

Earlier the British government said it was "working urgently to verify" the video, which purports to show the beheading of the British hostage David Haines. 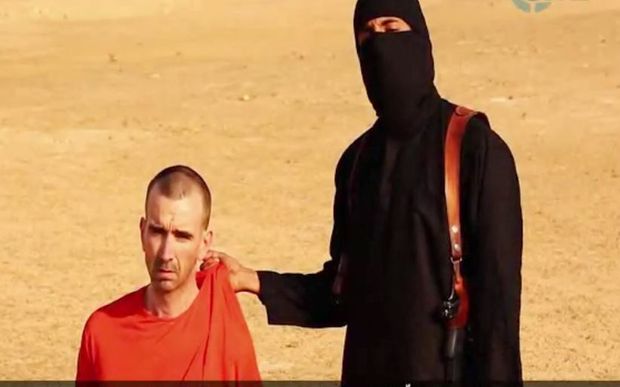 An image grab from a video purporting to show an IS militant threatening to kill David Cawthorne Haines. Photo: AFP

The two-minute-27-second video entitled "A Message to the Allies of America" Mr Cameron for joining forces with the US, which has said it is at "war" with the jihadists and launched air strikes against them in Iraq, AAP reports.

The BBC reports the British Foreign Office as saying that Mr Haines's family have been informed.

Mr Haines, a father of two, was taken hostage in the Idlib province of Syria, in March 2013 while helping French agency Acted deliver humanitarian aid, having previously helped local people in Libya and South Sudan.

The suspected killing comes after his family had made a direct appeal to IS to contact them on Friday.

The family statement, which was released by the UK Foreign Office and addressed the militants directly, said: "We are the family of David Haines.

"We have sent messages to you to which we have not received a reply. We are asking those holding David to make contact with us."

IS has seized large swathes of territory in Iraq and Syria and declared a new caliphate - or Islamic state. It has killed the two US hostages in recent weeks, posting video evidence on the internet.

The threat to kill Mr Haines was made during a video posted online showing the killing of US journalist Steven Sotloff earlier this month.

Kerry in Paris for talks after Middle East tour

US Secretary of State John Kerry has arrived in Paris after a four-day tour of the Middle East trying to build a coalition to defeat Islamic State.

Nearly 40 countries, including 10 Arab states, have signed up to a US-led plan to tackle the extremist group.

France is hosting a regional security summit on Monday, when French President Francois Hollande will welcome diplomats from up to 20 countries for a conference on Iraqi security.

However, the US refused to allow Iran to attend, prompting Tehran to dismiss the talks as "just for show".

The summit come ahead of a United Nations Security Council meeting next week and a heads of state meeting at the UN General Assembly later this month.

Last week, US President Barack Obama presented a strategy to fight IS in both Iraq and Syria.

IS controls large parts of both countries and the CIA estimates that the group could have as many as 30,000 fighters in the region.