With five days to go to Fiji's general election, campaigning is beginning to wind up. 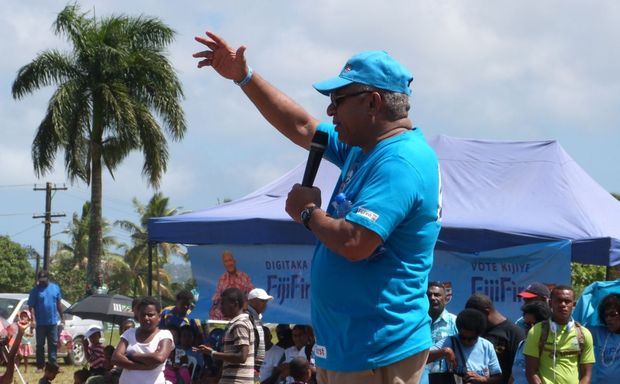 Tomorrow is the last day any sort of campaigning is allowed.

All yesterday afternoon, the party of the ousted Prime Minister Laisenia Qarase, SODELPA, held its final rally in a village near Suva's airport.

Today, FijiFirst, the party led by Rear Admiral Frank Bainimarama, held what it called a family fun day, although all the party's senior figures were due to deliver speeches. 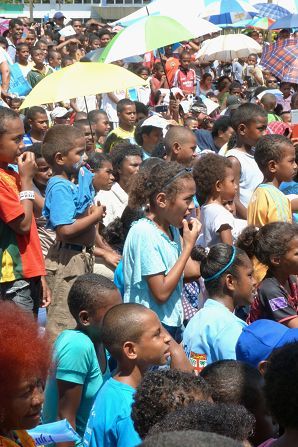 The crowd at the FijiFirst rally listens to speakers. Photo: RNZ / Philippa Tolley

The only broadcast leaders' debate will be run on a local radio station tomorrow between the leaders of FijiFirst and SODELPA.

A televised debate between the two was due to be held last night but the SODELPA leader, Ro Teimumu Kepa, pulled out, citing concerns that Fiji Broadcasting might control which questions were put to the two leaders.

The indigenous Fijian-backed party is also unhappy that a permit to hold a march leading to a rally was cancelled.

SODELPA was forced to cancel the march and move to a different venue after permits were changed, and senior party candidates believed thousands would have turned out had it been allowed to go ahead.

Senior party candidate Tupeni Baba said the ruling regime should have stepped into caretaker mode but it is still, as he puts it, "in the harness", and influencing events.

He believed those in control of organising the permits did not want to upset the current administration.

Several thousand people attended the FijiFirst rally near Suva this afternoon, where Mr Bainimarama attacked the campaign messages from some of his rivals.

Mr Bainimarama told the crowd a vote for SODELPA was one thrown in the rubbish bin.

He warned anyone who might stir up trouble or try to put pressure on voters would, metaphorically, have a leg cut out from under them as the anti-corruption body was investigating complaints.