The leader of the Fiji Labour Party says the directive not to hold or broadcast a broad leaders' debate was given verbally during a meeting between news editors and officials from the Media Industry Development Authority.

The chairman of the Authority, Ashwin Raj, has threatened legal action if Mr Chaudhry cannot provide evidence, but Mr Chaudhry says he would expose editors if he revealed his source.

Mr Raj said he cannot confirm or deny that the former director of MIDA, Matai Akauola, gave instructions to the media before resigning to contest the election with FijiFirst, but says Mr Akauola often held informal discussions with editors.

Mr Raj says as the chairman he has the final say, and no-one has approached him seeking clarification.

But Mr Chaudhry says the instructions were clear.

"They were told specifically that it was the Media Authority which was going to organise a debate and the media were not to do it on their own. This was done in a meeting that he had with the editors of the news media." 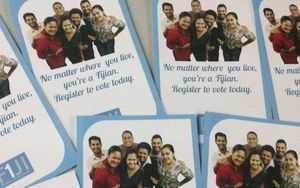