The police said the search warrant was granted after they received an allegation of a sexual nature dating back to the 1980s, involving a boy who was under the age of 16 at the time.

Sir Cliff, who's 73, is overseas and was not at his Berkshire home when the police searched it. In a statement, he said the allegation was completely false.

The investigation is not connected to Operation Yewtree, an investigation into sexual abuse allegations, mostly involving the abuse of children, which began with a probe into the activities of the late British celebrity Jimmy Savile.

Police said officers from that operation - set up by the Metropolitan Police to investigate hundreds of allegations in the wake of the Jimmy Savile scandal - had been informed of the investigation. 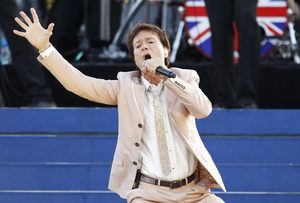 Sir Cliff, who was believed to be in Portugal, said he would cooperate fully if the police wanted to speak to him, the BBC reports.

"Beyond stating that today's allegation is completely false it would not be appropriate to say anything further until the police investigation has concluded."

The singer, born Harry Webb, is one of the most successful British musicians of all time.

He has sold 21.5 million singles - more than any other male British artist - and is the only performer to have had at least one UK top five album in each of the last seven decades.

He was knighted in 1995 and performed at the Queen's Diamond Jubilee concert at Buckingham Palace in 2012.