The CIA is no longer using vaccination programmes as a cover for spying operations. A White House aide said the CIA stopped such practices in August. 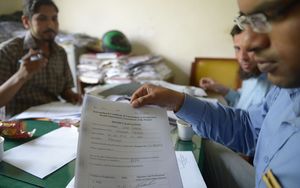 Polio vaccination certificates are prepared at a hospital in Rawalpindi. Photo: AFP

The CIA used a fake vaccine programme to try to find Osama Bin Laden before US special forces killed him in 2011.

The Pakistani Taliban has since targeted polio vaccination campaigns, saying they are a front for spying.

The BBC reports more than 60 polio workers and security personnel were killed between December 2012 and April 2014, most of them in the Khyber Pakhtunkhwa province.

A Pakistani doctor accused of running the vaccination campaign was imprisoned in 2012 for helping the CIA.

Correspondents say he is regarded as a traitor by Pakistan's security agencies.

An American professor says the use of a polio programme in efforts to capture Osama bin Laden in Pakistan damaged the worldwide campaign against the disease.

Dr John Finnegan Jnr told Nine to Noon it massively set back the fight against polio.