American television comedy pioneer Sid Caesar has died after a lengthy illness. He was 91. 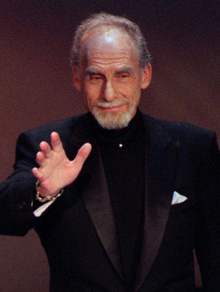 His film and television career spanned six decades; most notably in a weekly programme in the early 1950's called Your Show of Shows on NBC from February 1950 to June 1954.

Each was 90 minutes of original comic material. The show is widely considered the prototype for every American TV sketch series that followed, including Saturday Night Live.

"He was a unique talent, and he was a pioneer of television and entertainment when television was in its infancy," said Eddy Friedfeld, who helped Caesar write his 2003 autobiography.

Your Show of Shows and its successor series, Caesar's Hour, had a roster of writers that included Neil Simon, Woody Allen, Mel Brooks, Carl Reiner (who also co-starred on the show) and Larry Gelbart.

It also featured a cadre of regular singers and dancers, as well as ballet and opera performances to lend an air of cultural refinement.

But the series was a hit for the comic chemistry between Caesar and Coca, a former vaudeville performer nearly 14 years his senior who died in 2001 at age 92.

Some of Caesar's most popular bits were built around pompous or outlandish characters - such as Professor von Votsisnehm - in which he spoke in a thick accent or mimicked foreign languages in comic but convincing gibberish.

"He was the ultimate, he was the very best sketch artist and comedian that ever existed," Reiner said. "His ability to double talk every language known to man was impeccable."