Opinion - The All Blacks have changed hotels this week in Tokyo, and it's fair to say it's been an interesting experience getting used to their new neighbourhood. 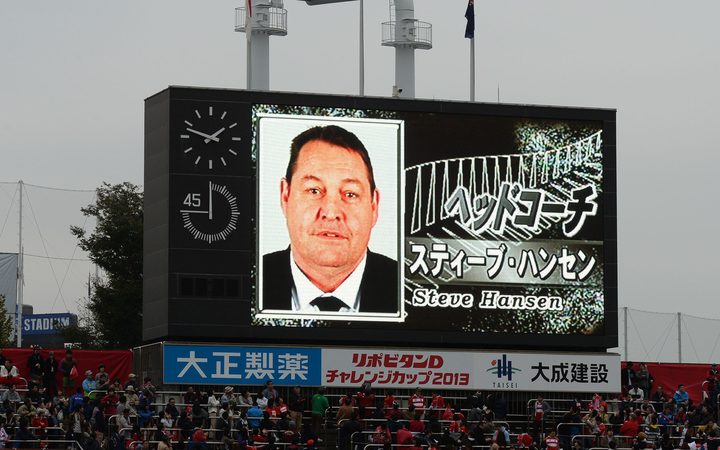 All Blacks coach Steve Hansen on the big screen in Japan Photo: Photosport

It's the one they'll be based in next year for the World Cup, and on paper it makes perfect sense.

The Hilton Tokyo Bay is a plush hotel with all the amenities they need, there isn't far to go to their state of the art training facility, and it's suitably enough far away from the hustle and bustle of one of the busiest cities in the world.

It sits on the edge of a mostly reclaimed peninsula in Chiba, just on the other side of the perimeter fence for what takes up around 99 percent of the area: Tokyo Disneyland.

Therefore, in order to get there using the highly-efficient Japanese public transport system, I have to jump on the circular Disney monorail from the main train station at the entrance of the park.

This makes for a surreal experience, not least because the monorail is decked out with Mickey Mouse-shaped windows and has A Whole New World on repeat for the entire 10-minute voyage.

Each journey I've been surrounded by young families toting prams and gift bags, and the odd Westerner there for the kitsch value - usually decked out in a full on Frozen or Little Mermaid outfit.

The attendants on the line wear cream 1930s cartoon-style uniforms, complete with hats and white gloves.

Then, not long after jumping off, I'm sitting in an air-conditioned press conference room listening to the All Black coaching staff and players talk about test rugby. It's hard to concentrate on what they say - the song from the monorail is usually still stuck in my head.

Out on the ground floor, puzzled families staying in the Hilton because of its proximity to Disneyland stare at the massive men wandering around the corridors in shorts and jandals.

A couple of tourists have asked me exactly who they are, because they probably weren't thinking they'd be sharing a hotel with 51 rugby players when they planned their Disney treat for the kids.

Over the road from the hotel is a massive sea wall, ominously guarding the peninsula from a possible typhoon or tsunami.

Out in the water of Tokyo Bay is where Godzilla was fabled to have risen from the depths and terrorized the local population, it's highly likely some of the children staying in the Hilton probably look up at the All Blacks and expect them to start on some path of destruction of their own.

That's what it's been like this week, to and from Disneyland.

Apart from today when we were mercifully spared the trip and instead got to attend the launch of the new playing jersey in the city.

All jokes aside about the All Black jersey being possibly the easiest rebrand in the history of design, the event in a repurposed warehouse on the Tokyo waterfront was actually very slick and impressive.

Adidas clearly have the most clout when it comes to who they get to attend their events: Kieran Read, Beauden Barrett, Sonny Bill Williams, Aaron Smith, Rieko Ioane and Ryan Crotty all marched down the stairs of the venue in their new jerseys.

Usually a sponsor would be lucky to get more than two All Blacks, let alone five of the most important in the team.

All of them will be off on Thursday, bound for more promotional work in London before getting down to the business of beating England the following weekend. Whether the teammates they've left behind in Tokyo can do a Godzilla on the Japanese Brave Blossoms this weekend remains to be seen.

So just a couple more trips on the Disney monorail and its infernal soundtrack before then ... wish me luck.