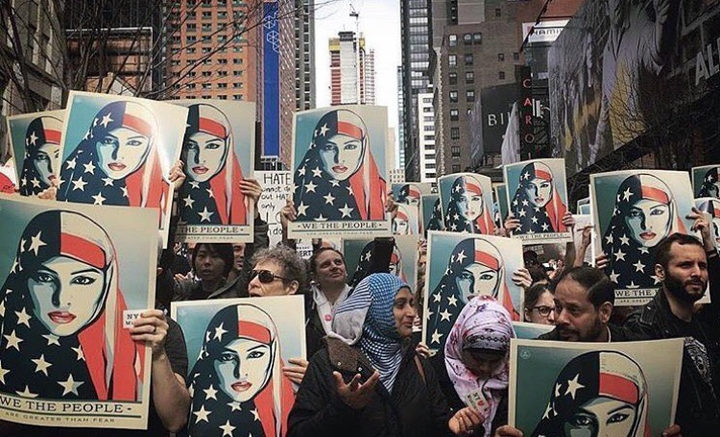 On 21 January 2017, an estimated 2 million people marched in cities around the world for women’s rights, LGBTQI rights and racial equality. The march took place on the day after US President Trump’s inauguration – and was a direct reaction to a presidential campaign that many saw as fear mongering, and aggressive towards already-marginalised communities.

Lifted high above the heads and pink pussy hats of the protestors were signs that expressed people’s dismay at election result and voiced support for an inclusive America. One of the posters that stood out was one of a woman wearing an American flag hijab, with the words: “We the people are greater than fear”.

We The People was co-created by Cleo Barnett, an artist who was born in New Zealand, raised in Seattle and returned here as a young adult where she established herself in the local art scene. Working in public art curation, Cleo set up K Rd’s ‘First Thursdays’ event, and curated over 300 events over the course of six years, including Auckland Art Week.

To mark the one year anniversary of the march tomorrow, Cleo is in Las Vegas, where together the Women’s March and the Amplifier Foundation, which she co-founded, will launch their next campaign. 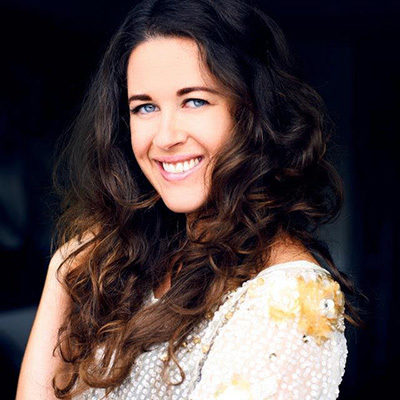 “On the day that Trump got elected we just completely shifted focus and we pretty much said, ‘We might not have work in six months’ time, but we’re going to put all of our funding into … the inauguration.”

“[Amplifier co-founder Aaron] photographed the Bush inauguration many years ago and he said when he was there as a journalist it was really hard to … there were a lot of pirate flags and rainbow flags and signs and there really wasn’t a cohesive message that protesters were getting across, so he had this vision of creating a really strong unified message that united people across party lines.”

As a non-partisan organisation, Cleo and Aaron set about creating a campaign for people at both ends of the political spectrum.

“We really wanted to create a campaign that connected people across party lines, that created a united vision for where we wanted to go as a country, which was really based off human values.”

A Kickstarter page was set up to help to pay for the campaign’s distribution costs and artist fees. Within days $1.8 million was raised, making it the largest art Kickstarter to date.

At about the same time, Cleo and Aaron heard about the planned Women’s March through the grapevine, and decided to contact organisers to look at collaborating on an open call for submissions for their campaign.

“We were just talking over the phone and they pretty much just trusted us, they sort of gave us a criteria of what they didn’t want, and then we used their manifesto as inspiration for artists to submit their work based off their manifesto and ended up getting over 5000 submissions in eight days,” Cleo says.

In addition to Shepard Fairey, who created the image of the woman in the American flag hijab, Amplifier commissioned artists Ernesto Yerena and Jessica Sabogal to create the campaign’s central imagery.

“In terms of the subject matter, it became really clear that we really wanted to highlight the people that Trump was most violently targeting in his election campaign, so that was young black boys, immigrants specifically from Mexico and South America, and the Muslim community.”

Named after the opening words of the US Constitution, their aim with We The People was to shift the conversation and to not to dwell on the fear and anger that many people woke up with the day after the election, Cleo says. Creating and distributing the art gave people a way to focus their energy.

“That was our goal, to turn something really ugly into something beautiful so people still could have these discussions and not just turn away from it, which is something we have a big history of doing…

As soon as we dropped off the artwork, about an hour later [the gallery would] call us and say all of the artwork is gone.

“Especially as white people and liberals, ‘okay I voted’, or ‘I recycle’ or ‘I don’t eat meat, so I’m doing my part’, but it’s like no, there are certain people who face violence every single day walking down the street and we have to stand up for everyone. Our liberation is tied into everyone’s liberation,” Cleo says.

With only two months between President Trump’s election and his inauguration, pulling off a massive campaign was not an easy task for the small team. Cleo used her experience in Auckland to help bring We The People to fruition, but developing events for a few thousand people in New Zealand was a little different to reaching half-a-million people in Washington DC, a city she had never been to before.

“What we came up with was we found about 20 local businesses or galleries that we delivered artwork to and created a map showing where people could pick up the artwork, but we weren’t expecting it to go so fast. As soon as we dropped off the artwork, about an hour later [the gallery would] call us and say all of the artwork is gone.”

Amplifier got two large vans to distribute the artwork throughout the city, where “people would literally run up to us and chase us down to get the artwork,” Cleo says. 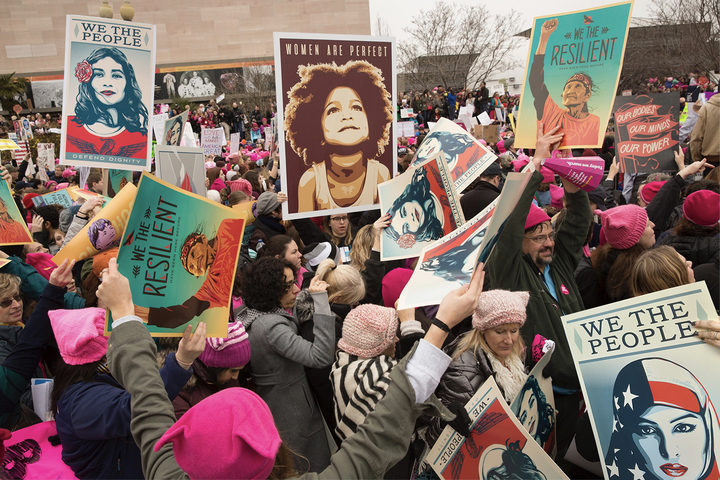 The images created for We The People became iconic symbols of the protest for a more inclusive society. Photo: Supplied

A wider selection of We The People posters were made available for free on the Amplifier website. A million downloads were made in just 10 days as people all over the world printed them off and took them to their local march. The Kickstarter campaign also allowed Amplifier to take out full-page ads in three national newspapers as another way of getting the imagery into as many hands as possible.

It was beautiful and it was amazing and it was surreal, but I don’t think I have been able to absorb the impact of what we created until recently.

The result was huge. In cities across the US and around the world, the distinctive posters helped to give a voice to the sea of people who were marching against marginalisation and injustice.

“On the day I was just absolutely exhausted and covered in paper cuts, people were ripping the posters out of my hands, like, I was literally bleeding.

“It was beautiful and it was amazing and it was surreal, but I don’t think I have been able to absorb the impact of what we created until recently,” Cleo says.

Cleo says they had a number of funders who told them they had never realised the power of a visual art campaign before seeing “We The People” at the march. 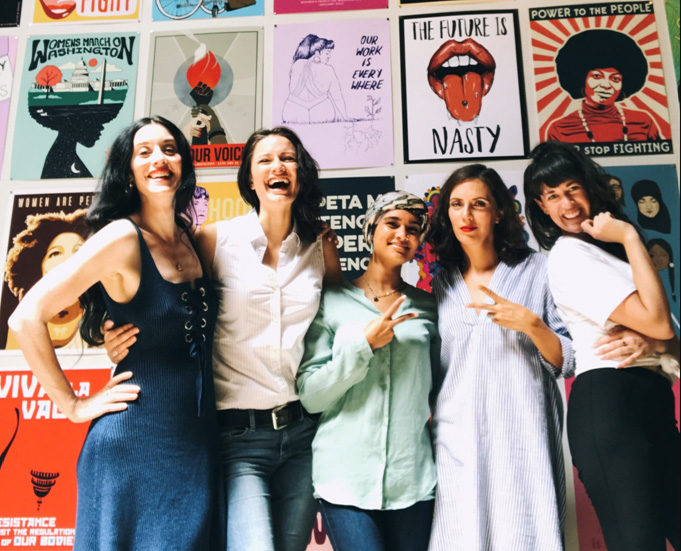 Cleo Barnett (far right) at a Los Angeles Women's March event in August with some of the organisers of the Women's March and Amplifier staff (L-R): Sarah Sophie Flicker, Tamara Power-Drutis, Ala' Khan and Paola Mendoza. Photo: Supplied

The focus of the next Amplifier campaign is a secret until its launch on Sunday, but Cleo says she will spend much of 2018 working on art installations in key swing voter states in the US.

Last year’s march was about creating a network of people who want to participate in a movement of change and empowering those people to focus on their own local issues, Cleo says.

“How [the Women’s March committee] works locally, is there is always local committees and they work really hard at centering their voices so they don’t just go into a new state and just say, ‘This is what we’re doing’.”

In Las Vegas, Amplifier has curated artwork that addresses gun violence and the 2017 Las Vegas massacre, the largest mass shooting in US history. There will also be artwork that highlights issues faced by the state’s large community of sex workers, and another that references immigrants and those affected by the DREAM Act, which is being negotiated by the US Congress this week.

There are so many people out there who are already doing this work, so as Amplifier we want to amplify them ...

It is important for the Women’s March to build on the energy it has already harnessed, so that is it more than “just one amazing moment in time”, Cleo says.

“We really are looking at our artwork as a compass pointing to leaders and movements who have the solutions that we need for a sustainable future. There are so many people out there who are already doing this work, so as Amplifier we want to amplify them and provide a spotlight for all of these people who don’t know what to do and don’t know who to follow.”

Last year was bookended by the Women’s March and the #metoo movement, both of which had huge involvement and support from musicians, sports players and Hollywood actors. In 2017 it became clear that it was no longer enough for celebrities to remain a blank slate for their audience to project their own fantasies and ideologies onto. Having celebrities stand up and express their opinion on those issues helped to normalise conversations outside of activist communities, Cleo says.

“I know there is a lot of critique [of] celebrities getting behind the whole #metoo movement, but it is starting to shift culture. Even the conversations that I am now having with my dad I wouldn’t normally have, but he’s seen it on TV… so it does start to normalise this sort of dialogue, which seems really healthy.”

She says she has not been back to New Zealand since last summer - the longest she has been away since she moved back when she was 18 – and she is longing to come back, but staying in the US to work with Amplifier and the Women’s March feels like a good place to put her efforts now because there is so much happening.

“I’m excited about the idea of working more globally and seeing how we can have these conversations across borders, because really we’re all working towards the same battles, we’re trying to address the same issues and we’re trying to create a sustainable future so we can actually keep living on this planet.”