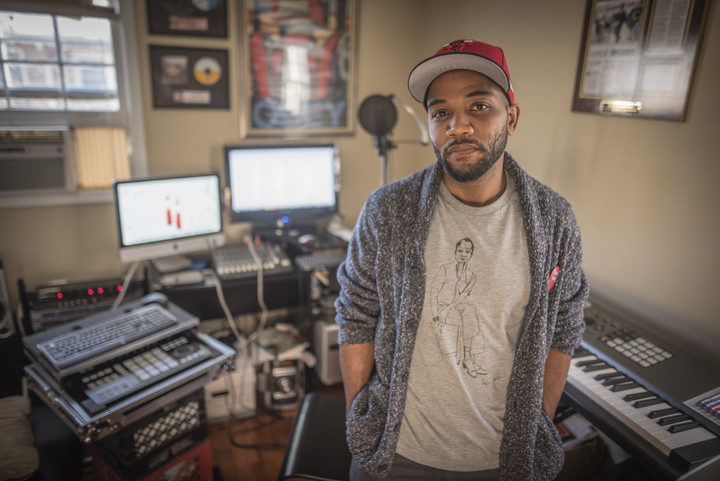 AD Carson, a student at Clemson University in South Carolina, combined his passions for activism, poetry, hip hop and academia in producing his PhD dissertation.

Titled Owning My Masters: The Rhetorics of Rhymes and Revolutions, the 34 track rap album uses the conventions of hip hop to explore questions around identity, justice, economics and language.

Carson performed five tracks from the album when he defended his thesis last month, while wearing a pin that said “Reading is sexy”.

“I presented the arguments in that voice in order to resist the idea that a rapping voice can’t offer some kind of critical, theoretical, philosophical engagement with pressing questions,” Carson says.

He joined RNZ Music’s Melody Thomas to talk race relations, the politics of language, and the influence of hip-hop.

Could you maybe tell me a little about the ways you’ve combined audio recordings with samples and with your own lyrics and to what purpose?

In one piece, 'Internal Contradiction', taking the audio from Huey Newton’s interview with William F Buckley, and also audio from Malcolm X being interviewed at two different points in his life where the answer to the same question contradicts itself because of the circumstances that he went through in those particular times, and then setting that to a sample from Django Unchained.

What place did music have in your family growing up?

I grew up in a family that was heavily invested in music both as creators of music and then consumers.

My father played in a band with my uncle and my aunt, and their father played the blues. He was a travelling musician. My mum was choir director, her parents - my grandfather - played the guitar in the local church, and my grandmother sang. But I that think I was resistant to hip hop until I head Common Sense’s 'I Used to Love H.E.R'.

Before then I’d always thought I’d like to write poems - I just liked the sound of rhyming words. But hearing Commons’ 'I Used to love H.E.R.', when he gets to that last line, after giving this entire history of this relationship that he has with H.E.R., when he says “who I’m talkin bout ya’ll is hip hop” I immediately thought I need to hear this song again.

And I heard it again, and I never really tired of it, because every time I showed it to someone who hadn’t heard it, it became new to me. It was a way of talking about history, or a way of describing history as a person - a person who might interact with any of us.

And from that point forward I thought maybe I can do something like that and it issued a challenge to me as a poet and as an MC, and as an artist who’s trying to provide what Common provided for me on that album.

How do you see music and art playing a part in post-Trump America? If you could call out two artists with what you would, in an ideal world, expect them to be doing in the current political climate, what would that look like?

I really love Kendrick Lamar’s To Pimp A Butterfly album, it is a great album and I think many people have flocked to it for that reason. In a way that, say, a song like 'Alright' speaks to the current moment - like the idea that “we gon’ be alright”.

This is a song that’s playing while people are out at protests. We’ve seen an upwelling of protests going on since the election so I imagine that artists can intervene in that space to speak about that better world that we are collectively imagining.

Also, I’ve been listening lately to KXNG Crooked - Crooked I. I think he’s a fantastic lyricist, and somebody that more people should be listening to, but also Chance the Rapper has been active, actually physically in the city of Chicago. And he’s an interesting case of what an artist might be able to do.

For him it seems, wanting to interact with politicians, but when that fails, sort of moving around that process, or trying to bring a community together to look at what might be done in the absence of politicians that won’t do the job that they’re tasked to do.

So I say that artists have the responsibility to continue calling out what we see as injustice and to speak to and with the community that listen to us and engage with us and inform us and to continue to be receptive, continue to be brave and to take those steps toward that better world that we envision.

You had to defend your dissertation as a rap album last month, how did that go?

Well, the auditorium was filled to capacity and I think that they had an overflow space out in the hallway and there were people watching on monitors, and it was a successful defense. I was able to walk out after shaking hands and getting pats on the back to the title of Dr Carson, so that felt great and I’ll look forward to walking across the stage in May.