Reporting odds is part of sports coverage, but some say it’s marketing masked as news.

The urge is yet to go away.

These days, Ricky only bets once or twice a month. On rugby, basketball, cricket - that sort of thing. He bets $20 at a time. He’s got a steady job and his savings account looks healthy.

“I think I actually won more than I lost the first year I bet. This was after I got my first job. Every month or so I would try and run $20 up to $100 or so and then withdraw,” he said.

Things got worse. Ricky has visceral memories of sitting on his bed, uploading $20 after $20 after $20 into his TAB account one afternoon and losing each time.

“I started to lose a bit more, and then a bit more and my $20 each month became $20 each week and pretty soon it was every day. I might win a bit back, but I must have been losing $100 or $200 each month easy, probably more. I was afraid to look at my bank statement and check.

“I don’t earn a lot of money, but I was never broke or anything. If I had a particularly bad week I would try not to go out that weekend.”

One day he decided to put $200 into his account.

“I had lost about that so far one week. I put $200 in my account to try and get it back. I lost all of that on a random American college basketball game - this was like a year ago,” he said.

He’s called the TAB to reopen and close his account so many times “a customer service guy once had a go at me for causing them so much work”.

The tactic has worked, sort of.

“I’ve tried keeping it closed and it’s stopped me betting for a bit, but there might be moments when I’ve said to myself ‘$20 on the rugby tonight to make it more interesting’ and I’ve reopened the account.”

His account is open right now and has been for a few months.

“I’ve probably lost about $150 in the past few months - I can live with that. In a weird way it’s easier having the account open and feeling like you can control it, rather than having it closed and knowing you can reopen it at any time,” he said.

“It’s still fun. It’s easy. They save your credit card number on the website. You just have to type in a number and click a button.”

Nevertheless, he tries not to think about gambling or the TAB as “I feel like I’m always on the verge of … I guess you could say relapsing”.

He seemed at ease circling the boundary rope while speaking squarely into the lens.

“Which presenter is that?” someone in the stands asked.

“That’s not a presenter. That’s Mark Stafford from the TAB.”

“He gives the odds and stuff before big games.”

Stafford loves this kind of thing.

He’s been doing it for 20 years by his count, and is clearly at ease whether interviewing the Prime Minister or telling the nation about its betting trends.

Before major sporting events, the Sky broadcast crosses to him to find out the odds. It’s been a regular segment for years.

“I’ll always remember a few years back the All Blacks were playing the Wallabies and about 70 percent of New Zealanders were betting on Australia,” he said.

“What I do is present a barometer of what we think is going to happen and what the public is betting on, and people find that interesting.”

The Problem Gambling Foundation has a different take.

“What you are seeing is the normalisation of gambling,” said its spokesperson, Andree Froude.

“People are being exposed to gambling while they are watching and it legitimises it as a part of sport. We know from research that when young people watch these games, it makes them think gambling is a completely normal thing.”

That makes sense for Ricky.

“I do always notice Stafford on TV. I watch most of the Friday night games with my mates and they might say ‘shit, those are good odds’ or ‘I reckon I’ll put $10 on that’,” he said.

“I don’t get outwardly upset, but it does make me a bit sick. Honestly, it also makes me want to bet again. I feel like I see this kind of fake advertising way more. It’s everywhere. Most people wouldn’t think twice about it.”

When asked why it airs the segment and what it sees the TAB’s role being in its broadcasts, Sky sent us a statement: “Quite simply betting odds are of interest to our audience. It is not a large segment, rather a relatively short piece of information that a number of our viewers find entertaining, interesting or useful.”

Stafford has a cut-and-dry attitude to gambling.

“I know exactly what the people at Problem Gambling say. With anything in society, too much of something can be perceived as bad,” he said.

“But gambling in New Zealand is legal and well under one percent of gamblers have a problem - our average bet is $11, so people aren’t betting their house or their car.”

“The people we see come through our doors are usually at rock bottom,” she said.

“Many have lost their houses, their cars, their relationships, and they are often suicidal. They often don’t come for help until they reach rock bottom because of the stigma or shame associated with a gambling problem, or because it’s so easy for someone to hide their gambling.”

Froude pointed to a recent AUT and Gambling & Addictions Research Centre study that found 2.5 percent of adults in New Zealand experience harm from their gambling.

“Each person with a gambling problem affects about 5-10 other people - this means as many as 500,000 New Zealanders are affected in some way.”

Stafford doesn’t just make regular appearances on television - he can be seen and heard on the Mike Hosking Breakfast or RNZ, and was a frequent guest of Paul Henry’s on TV3’s breakfast show.

In 2015, he appeared on RNZ’s Checkpoint drive-time programme eight times - discussing the odds for the Melbourne Cup, the Rugby World Cup, the Super Rugby final and the Cricket World Cup. He appeared on Radio Live about once a month during the latter part of last year, giving the odds for an All Blacks test, Joe Parker’s title fight, the Melbourne Cup and the Olympics.

Radio Sport has a segment called the TAB Rambler on its breakfast show, where specific bets are publicised.

Stephen Hewson is the sport editor at RNZ and has been a sport journalist for two decades. There’s no set policy when it comes to RNZ’s coverage of the odds, instead, Hewson said it comes down to “news value”.

“The event that comes to mind is the Melbourne Cup - the race that stops two nations - and the odds side of things gets a good spin then as everyone does an office sweepstake for example,” he said.

Froude describes it as “marketing masked as news”, and online media are not exempt.

Until the end of 2015, Stuff ran a “weekly sports betting guide” called Bettor Informed, while at the same time, the NZ Herald ran a rival column called On the Punt where “favourable” odds were touted and “lucrative” returns promised.

When a particularly big bet is made or someone wins big, the TAB may send a press release to media.

Before the side’s World Cup quarter-final against France, there was this story: “TAB odds favour Milner-Skudder try.”

“Some people say you shouldn’t be able to gamble, but if you make it illegal, it goes underground. We want to keep sport clean.”

Stafford pointed to the fact the TAB is required to give back a portion of its turnover to New Zealand sport, including more than $1 million last year to both rugby and basketball.

The racing board’s most recent annual report said it gave $8 million to national sporting organisations, and $3 million in grants to grassroot organisations. 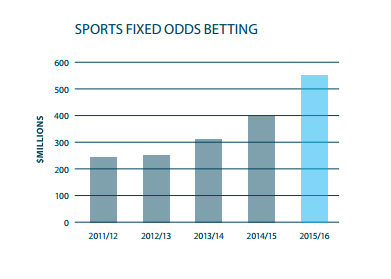 The annual report also shows the racing board, which operates the TAB, made a record $2.67 billion turnover last year. That was up 4.1 percent from the previous year, and from $1.81 billion five years ago.

In terms of online gambling, there were 180,797 unique TAB accounts through which at least one bet was made last year - up 10 percent from the previous year.

Figures from the Department of Internal Affairs reveal the average Kiwi gambler lost $616 during the last financial year.

The Advertising Standards Authority has rules regarding gambling advertising:

A recent advertising campaign comparing betting on sport to being on a roller coaster has saturated Sky Sport during the past two years. “Are you in?” it asks.

“Place a bet and you’re on a journey filled with tension, exhilaration and real excitement,” said the ad’s creative director, Dave Nash of Sugar & Partners, at the time of its release.

“The campaign represents this feeling coming to life in a literal way.”

“A roller coaster is often how we describe someone who has a gambling problem and it has the ups and downs that someone who is battling an addiction would have.

“Gambling for some can be fun and it’s a form of entertainment and they have a set amount they spend and it’s fine, but for others it’s not.”

She said the foundation’s main fight is to increase the awareness around gambling, and drive home the fact it can be “incredibly harmful, particularly for young men”.

“Other than that, of course we would like to see restrictions in the scope of the TAB’s advertising.”

She pointed to an Australian study of 50 young men authored by Emily Deans, a researcher at Melbourne’s Deakin University, that found “marketing plays a strong role in the normalisation of sports and in encouraging gambling consumption”.

“For the young men, the emotional investment in the game and the ways in which they consume sport, for the most part, now include betting on the match,” the study found.

Stephen Hewson said the simple nature of gambling has changed dramatically during the past 10 or 15 years.

“You don’t have to go down a dark corridor into a dark and dingy TAB room that is badly lit and full of smoke like the old days - it’s all online and the agencies themselves are on the high street and they’ve got big, clear windows and are made to look far more attractive,” he said.

“The only gambling you had was in pubs and by the pokie machines, and they’re still there, but in most sports bars you’ve now got a TAB machine right in the middle of the place that may as well be saying ‘feed me, Seymour’.”

Ricky doesn’t like the words “addiction” or “addicted”. He knows he has a problem and he reckons it could be a problem for the rest of his life.

“I’ve never thought of myself as having no self-control. Every time I put money in it is obviously a conscious decision,” he said.

“But every time I lost, when things were really bad, I would say to myself something like ‘you’re a fucking idiot’ and pace around the room.”

“I’m trying to give you an idea of what it’s like.”

He doesn’t think many people, including his friends, would “get it” because he’s never gone broke.

“While my money is in play it’s like anything’s possible. It’s a buzz. You justify it to yourself by saying ‘oh, I can afford to lose this much, so that’s how much I’ll bet’,” he said.

“I can go days, or weeks or months without betting. But there’s always a point, and once I decide I do want to bet, it’s hard to stop myself doing it again and again - and I mean over a few days or a few hours - trying to get that buzz back,” he said.

“In an ideal world I’m never reminded I can make a bet.”

*Ricky asked for his name to be changed.