Five Muslim friends who were assaulted in Huntly by a woman hurling verbal abuse - and cans of Cody’s bourbon and cola - forgive their attacker, and say they would like to meet with her. 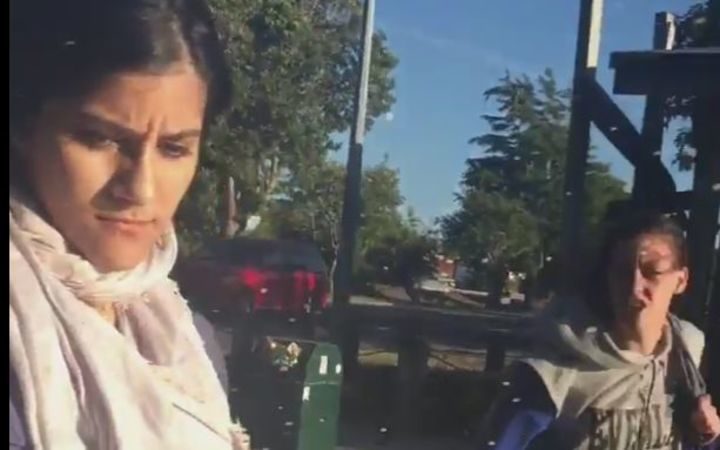 A group of five Muslim friends were abused in Huntly on Saturday. Photo: screenshot

On Saturday, members of the Ahmadiyya Muslim community held the Holy Quran Exhibition in New Plymouth. On display were copies of the holy scripture translated into more than 50 languages - including Te Reo.

The show aimed to educate people and build bridges, to teach people not to judge Muslims based on a small percentage of the population which committed atrocities, organiser Imam Mustenser Qamar said.

But after the show was packed away, and community members returned home, one group was faced with the exact type of behaviour they hoped it would help combat.

As five friends made a toilet stop in Huntly, they were abused by a woman hurling racial slurs and cans of pre-mixed alcohol at them.

The attack was caught on video and shared social media by Mehpara Khan. It went viral almost immediately.

Yesterday, police arrested a 27-year-old in relation to the incident. Today, in Hamilton District Court, the woman pleaded guilty to two charges of assault and one charge of behaving in an insulting manner.

But Khan says she and her friends forgive the woman.

“We just want her to get whatever support she needs,” she tweeted.

“We’d like to meet with her if that’s what she wants.”

Quick update. I've asked police to tell her we forgive her. We just want her to get whatever support she needs...1/2

Khan told RNZ she believed the woman's rants represented a minority of people in New Zealand.

"I think as a country we like to think of ourselves as good human beings and her five minutes of hate has led to such a massive outpouring of support.

"It's [posting the video online] been so much more powerful than anything that she's done."

The irony of the incident was not lost on Qamar.

“These women were at the forefront of our initiative to educate the public on true Islam over the weekend,” he said.

“This just goes to show that Islamophobia is real and is increasing.”

Anjum Rahman, a founding member of both the Islamic Women’s Council and the Hamilton Women’s Ethnic Centre (Shama), said the level of abuse experienced by the women in Huntly was not something she’d personally dealt with.

“I’ve not experienced abuse to that level - not physical assault or something throwing something at me, but verbal abuse - yeah - off and on,” she said.

“It’s the sort of ‘go back to your own country’ kind of stuff, just random people yelling as they go past. Frankly, I don’t take any notice of what they’re yelling. You get a sense of some people feeling that you don’t belong here.”

She said Islamophobic and racist abuse was often linked to overseas events.

“We saw a little rise of stuff after President Trump's election, but ever since the Muslim ban, what we’ve found is that we’re getting a lot of support and it’s actually quite the opposite, so this was quite surprising in that sense - things weren’t so bad.

“Initially it was quite scary with the shooting in Quebec, we weren’t sure how things were going to play out. But the general feeling from a lot of us is that people have just been really appalled at that policy and there has been a lot more support.”

She said the perpetrators of this kind of abuse were a small number of people, with the vast majority being “quite accepting.”

This is not the first time verbal attacks or suspicion have been placed on people who are - or are believed to be - Muslim, in New Zealand.

Last month, Newsroom reported a member of the public complained to Muslim sportsman Sonny Bill Williams’ sponsor BMW that Williams was making a one fingered “Isis salute” in a photo.

Always a good night out in Sydney with my brother. pic.twitter.com/rmml2GRbaC

In 2015, police were called to an Auckland cafe after a person saw headphone cables coming out of a Sikh medical student’s bag, and thought he was carrying a bomb.

That same year, a photo of another Sikh student was posted online alongside false accusations of criminal activity, and the man received death threats.

And in Invercargill, in 2013, a Pakistan-born taxi driver was called an “Islam prick” and told to “fuck off and go back to where you came from” by drunk passenger  Gregory Shuttleworth.