In the hills of the Kaikōura coast lives Pete. Locals call him Pete the Monk, Hippy Pete, The Hermit. One month ago, a 7.8 earthquake hit the region, causing billions of dollars in damage and reshaping the coastline. Tess McClure went to find out whether Pete came through. 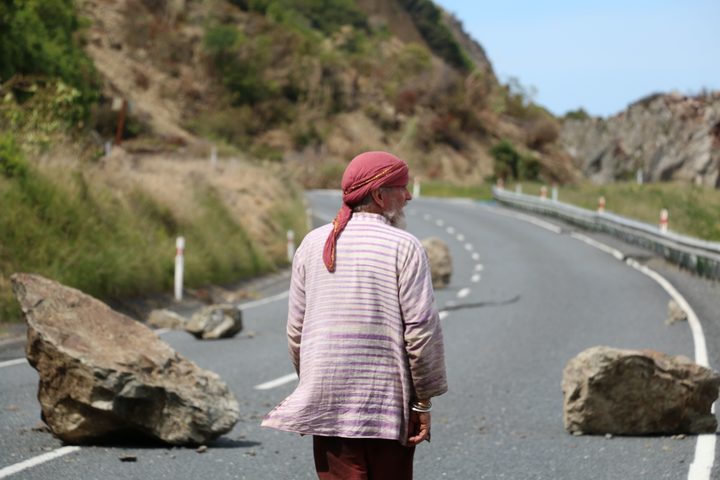 All up and down the coast, sections of hillside have crumbled, sending dirt and trees, debris and enormous boulders zig-zagging down the hill.

The trees that have fallen on the road are dying now. The sun is hot enough to turn their leaves crisp underfoot.

Trotting ahead down the highway is Pete. His frame is tiny, the top of his signature turban brushing somewhere around the five-foot mark. His feet are bare, thick and leathered. He doesn’t flinch clambering over the sharp edges of the slips, the hundreds of thousands of cubic metres of crumbling rock. Some of the boulders dwarf him.

Pete’s route home now takes him beneath the first slips. He walks blind through the black of the train tunnels, emerges blinking and dazed into the sunlight and up to the road.

“I still look both ways, to see if there are cars comin'.” He chuckles, and strides off. 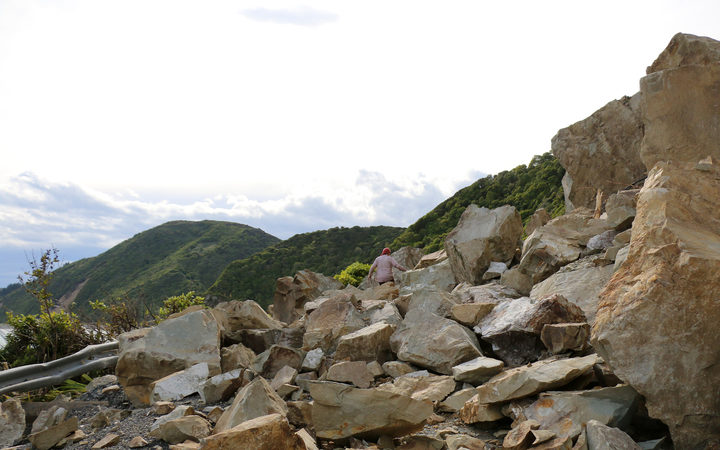 Pete clambers over an enormous slip to reach his house in the hills above the Kaikoura coast Photo: Tess McClure

Pete has spent the last 30 years largely ignoring or avoiding the hubbub of the highway - and now it’s gone. No cars. He doesn’t mind.

“That’s been one of the things, is it’s too accessible here, you know, it’s State Highway 1, with trucks and that kind of thing.

“It’d be sort of neat if it became a backwater, you know, and the grass comes back over the road. I noticed coming down the railway line that grass is starting to poke through.”

It is easy to imagine for a second the world has ended in some catastrophe and maybe this is the last man left, walking down the centre line of the road, bare feet padding over black skid marks.

Occasionally a helicopter flies overhead with a great bobbin of electrical wire suspended below it. The train tracks lie unspooled across the rocks. A cloud of gulls sprays up from the rocks as he passes.

Pete lives a little way from Rakautara, a tiny settlement along the highway just out of Kaikōura.  He came here around 30 years ago, settling first in a cave on the coastline. When winter came, he made his way into the bush and built a small home there.

Today, Rakautara is cut off from the world. The government is working to clear the highway to the north, and inland roads have opened up to Kaikōura, but Rakautara is still an island, accessible only on foot. Rockfalls from the earthquake have wiped out the road on either side. 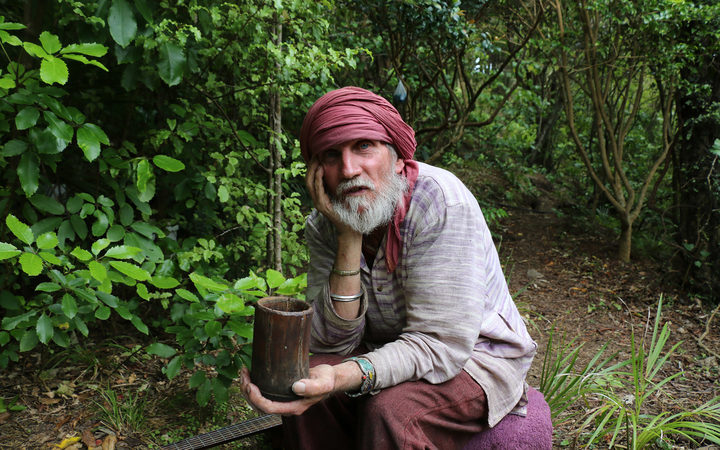 Along on the coast, Pete points out where the rocks have been pushed out of the water, some by up to five metres, bringing skirts of seaweed and shellfish with them.

“Can you imagine the noise?” he says wonderingly, looking out the sea. “It was like being inside the big bang.”

The earthquake hit Kaikōura two minutes after midnight.  When it happened, he says, the noise was absolute.

The cracks in the ground have opened up all around his home. A little way up the path, the land has fallen away, along with it a carefully tended section of vegetable garden.

“My biggest heartache was my garden,” he says. “But it’ll recover.”

He’s tried to fill in some of the bigger cracks with dirt, rocks and debris, “in case the men with clipboards come”. They’re still gaping.

He is lucky the entire carefully constructed hut - complete now with a solar panel and stereo blaring Radio New Zealand National - was not sent sliding down the hill to the road below. 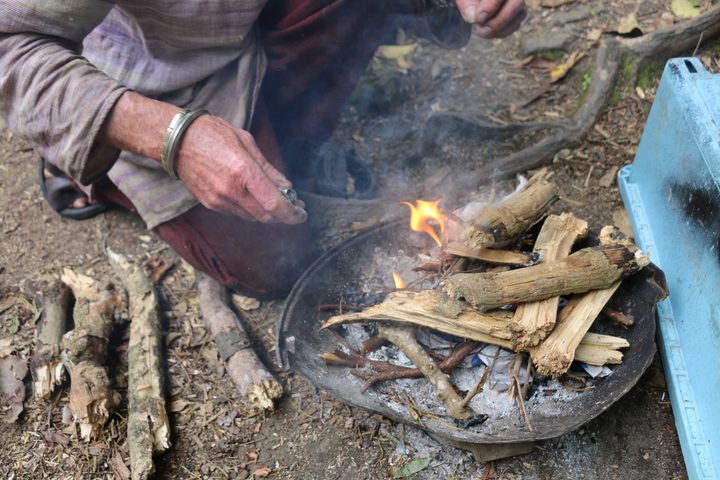 Pete lights a fire to boil water. He is largely self sufficient. Photo: Tess McClure

He lights a fire to boil the kettle, mashes tea leaves into a wooden cup.

“I found it difficult in the first three or four days just to be on my own,” he says, “I guess you couldn’t not be shaken up.”

“I normally love being up here and it has to be a serious excuse to go down to the village. But it was really necessary that I be around people.”

But people tend to present problems of their own. Pete says several days passed before helicopters came to fly people out of the village and by then some nerves were fraying. He refers vaguely to a spat about access to the water supply, someone cutting off the pipe he’d run from the creek.

Currently, he’s getting his water from a fresh spring down by the beach. He likes it down there, doing his laundry with no cars passing. Sometimes he gathers seagull eggs from the surrounding rocks.

“I’m told that a seagull, depending on her age, will lay one two or three eggs. And if you get there early, and if there’s two there, and you can take one, she’ll lay another one. So if you’re there early, it’s not really interfering too much.” 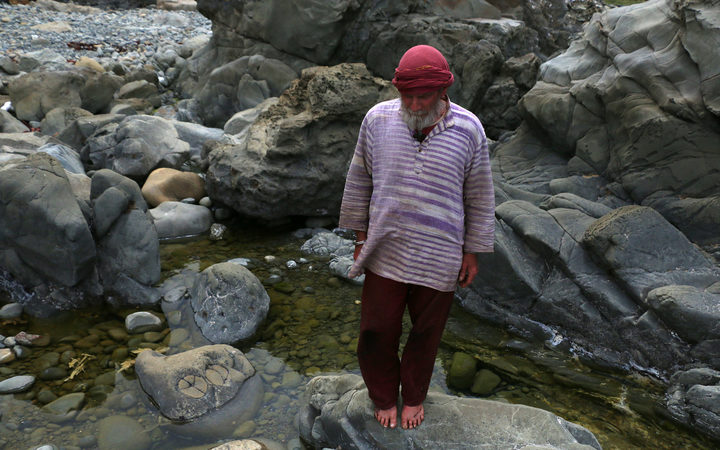 The earthquakes cut off Pete's water supply. Since then he's been using this spring for fresh water. Photo: Tess McClure

Pete glances up from his tea as the camera shutter clicks.

“I’ll come to your house and start photographing you plugging in the bloody electric jug.”

That’s the thing in the city now, I tell him. Wherever you go everyone’s photographing everything.

He looks quizzical. “For what reasons?”

Pete is nonplussed. Does he ever go online? 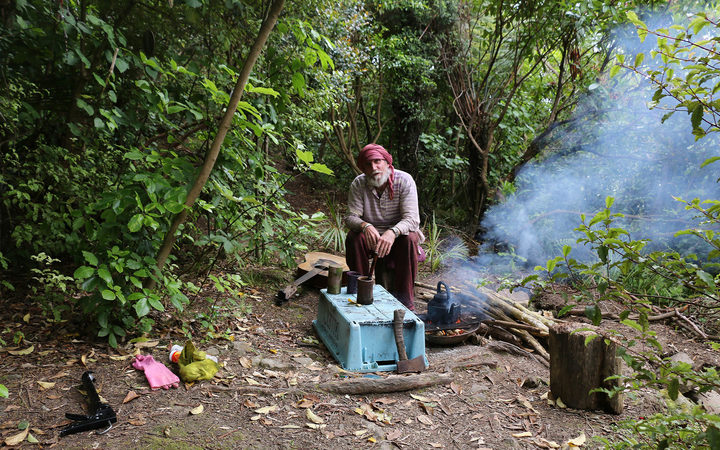 “There is an amazing sense of peace here. When things like this happen it puts things into perspective. I think, I might have lost stuff, but what about the people in Syria?

"And I came here with a sleeping bag and a couple books, and now there’s a solar panel and the Grateful Dead to listen to.”