As the evacuation of Aleppo begins, journalist Emma Beals shares accounts from sources and friends in the besieged city. 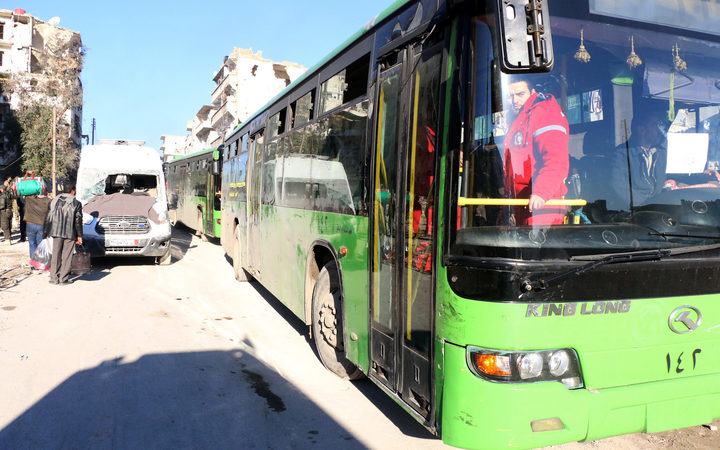 A convoy including buses and ambulances, wait at a crossing point at Amiriyah District of Aleppo. Photo: AFP

This morning began with heart in throat. For me, like those living in east Aleppo, there was little sleep to be had.

I've covered Syria since 2012. I've visited Aleppo many times and so many of my sources and friends come from the city. Aleppo has been the sun in my solar system for years now.

A ceasefire deal that was brokered between Turkey and Russia on Tuesday, with an evacuation that was to start in the early hours of Wednesday morning, was called off at the last minute. The now infamous green buses reached the last checkpoint into the city, when Iranian militias decided they did not agree with the terms of the truce and sent them back.

After months of siege, and a weeks long military campaign that had stepped up, the last few days had felt long and painful. Those inside, and outside, Aleppo were trying to stretch minutes into hours, in the hope the extra time would create the space their cries for help needed to reach those who could offer them hope.

Hope arrived – bittersweet and late – in the form of the evacuation deal, before being snatched away at the last minute. After frantic negotiations by all sides, the deal was back on by late Wednesday night. The ceasefire started again at midnight, and, remarkably, it held.

This morning, the evacuations slowly began. Snipers killed one Red Cross worker and injured others. It seemed like that might derail things again – hope is hard-won in Syria these days. But, the first buses and ambulances – which were to leave at 8am – finally began moving at around lunchtime.

Images of dozens of green buses snaking through Aleppo's bombed out streets, rode heavy with the weight of four years of suffering and the symbolism of defeat. The indignity accentuated by the posters of President Bashar al-Assad's face that hung in the bus windows.

As residents packed their things, the ceasefire meant they could come out into the street for the first time in days. Thirty-three year old Wissam Zarqa, a university lecturer, told me by voice message that he felt happy this morning: “I can see all these people I like around me. All my students are still here. I was happy they could make it until this moment and stay until the end.”

Preparations to leave were bittersweet. The relief that survival was now possible, was tinged with the heartbreak of leaving the only home they've ever known, where they’d stayed in through years of war.

“I'm with my family, with my in-laws - all my friends are still here, none of them left so far,” said Wissam.

People from West Aleppo celebrate the end of their city's siege seconds before evacuation of last remaining rebels & civilians from the East pic.twitter.com/xafPPrV92R

The green buses first appeared in the Damascene suburb of Daraya in August this year. Often thought of as the heart of the revolution, Daraya had been under siege for years - barely receiving aid, it was a heavy military push that took out its last hospital and brought it to its knees.

As the evacuation deal was finalised, and Daraya's residents got ready to leave, local resident Hussam Zyadah said: “No more barrels on Daraya, no more death, no more fight, no more revolution, no more dignity, no more humanity. As the whole world left it alone.”

It felt like failure. As a journalist covering the war, and as a human being.

Evacuations have continued through the late summer and autumn – Moadamiya, al-Waer, Qudsaya. All the while, Aleppo's siege grew tighter. When the military campaign ramped up in recent weeks, it was clear Aleppo would become the largest, and latest, area to succumb to the “submit or die” strategy. Hospitals were bombed out, civilians killed and injured, neighbourhoods retaken.

Aid workers, doctors, journalists, activists – those who stayed behind to help and to shine a light on what was happening in the city, worried the most. Syria's prisons are dark and unforgiving, and often those who enter them, don't return – including many of those who protested peacefully against the government back in 2011.

Idlib, the destination for those leaving Aleppo, offers safety in the short-term, but the consolidation of those leaving opposition-held areas in one area means there is no protection for them there either.

Many will go on to seek refuge elsewhere. As Assad and his allies regain control of the country, so many who have fled Aleppo won't be able to return safely, no matter how much they may want to.

New Zealand and other countries will need to step up and allow more refugees. The whole world left them alone once already, to do so again would be too cruel.

Back in Syria this evening, Mohammed Edel, a 31-year-old teacher from Aleppo, whose wife is eight months pregnant, was heavy-hearted, but hopeful when he sent a voice message of relief. Just a couple of days ago, he believed he would die when the government's forces took back the city, but today he was looking to the future: “Tomorrow, I am going to leave my homeland. I am going to leave Aleppo. I am going to leave a piece of my heart here and go away. I will be displaced. But I promise you that one day I will make it back to my homeland, to my Aleppo.”