Seeing colours, shapes and auras the rest of us don't. 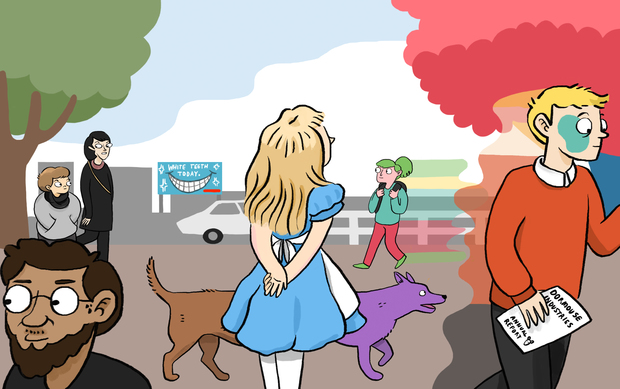 (Note: This story mentions self-harm. If you experience depression, there are contact details for support services here. Alice in Wonderland Syndrome is a neurological issue, not a mental health issue.)

Every day, for five years now, I have had soft visual hallucinations and distortions, essentially every few minutes. People’s hair will change colour. Colours float around them – like flashing lights. Often, when they walk around, I can see an opaque ghost trail following behind their bodies. The sky has been green, pink, purple, red. The trees too. And my own skin.

I have a heightened sense of visual snow and static, and I’ve had many geometric hallucinations - large squares, hexagons, and triangles that float around on all manner of surfaces.

If a photograph on flash is taken of me, the afterimage will last up to an hour, and it will move around, changing shape and colour. All patterned surfaces have their own afterimages, in themselves. Objects sometimes distort shape, but not as often as these other experiences.

The distortions come with having Alice in Wonderland Syndrome, a neurological disorder that commonly affects children. In the traditional sense, it's defined as a migraine-like condition that distorts the sizes and shapes of objects in reality. That’s what most websites will tell you. But they’re leaving something out. For many sufferers of this condition, a different distortion of vision can occur.

The first time it happened, I was sick with a fever and I had woken up from a nightmare. I ran into my parent’s room, kicked my father out of bed, and when I stared at the ceiling I saw a green T-shaped blotch appear for a few seconds. I didn’t know what this meant, but I didn’t say anything. I didn’t fall asleep until 6am.

The next day, I went away on a school trip and on the second night away I had a fever. Shakes and chills and auditory hallucinations, convulsing my limbs – head-to-toe, toe-to-heel. A temperature of 41 degrees and a trip to the closest hospital. But after this, when I had returned to Auckland, I began to notice distortions in the world around me. The fabric of reality was changing very quickly.

One of the first times this happened, I was sitting down to lunch, at school. There was a small, yellow triangle floating on the tiled ground.

I said to my friend: “What is that thing there?”

She shut her book, and squinted uncertainly at the spot in question. “Where?”

In English class, it began to rain indoors, under the ceiling. I balled my hands into a tight fist and left to go to the bathroom. In the corridor, which was empty and a bit hazed at the end, the walls were breathing. Moving in and out; closing around me where I stood. Like those nightmares where they’re going to squash you. The carpet was bubbling in a similar fashion to magma. There were strange, coloured shadows and floating shapes (large metre-by-metre squares mostly) moving up and down the walls.

Transparent tubes fell down from them, like sequins; floaters surfaced everywhere. Eventually, most things mutated.

I stared at them for a very long time, and I went back to class, quietly.

The experiences didn’t stop. Soon, large patches of the sky were changing colour on my bus home from school. Transparent tubes fell down from them, like sequins; floaters surfaced everywhere. Eventually, most things mutated. Purple leaves and trunks on the trees (colours that distorted and moved around, that were not static).

Colour and afterimage everywhere it wouldn’t normally be.

Around people even. Their faces – their hair, their shoulders. Their whole bodies. The medical description I’ve read in my notes for them is “flashing lights”, and “auras”.

At night, it was a little more frightening. There were big, black squares floating across my walls in my room, some of them as big as the whole ceiling.

When I sought help from a psychiatrist, I had an MRI of my brain. I had a neurological examination, and a lot of blood tests. I began taking antipsychotics (risperidone, aripiprazole, quetiapine), and antidepressants alongside them. But these medications did not stop the visual experiences. They made me sleep for around 17 hours, most nights. They made me drool at the mouth and stopped my arms moving when I walked. They made it difficult to attend school, which was challenging enough with hallucinations on the whiteboard, so I left when I was 17.

I considered killing myself a lot, because I developed psychosis at the same time as Alice In Wonderland Syndrome, and hearing voices while having minute-to-minute visual hallucinations isn’t always nice. I self-harmed. I said to my mother, “I can’t live with this. I’d rather die, than live with this."

I found it hard to read; the pages would often have flashing lights around them; colour and shapes that didn’t disappear when I looked away.

Eventually, I went to see an ophthalmologist. They were a family friend. They had a lot of weird instruments and they said: “I’ve met half a dozen people in my career with this, and the majority of them are children. It’s called Alice in Wonderland Syndrome.”

We gave him baking, the next day. Afghan cookies in an Alice in Wonderland themed box, with rabbits on it.

My psychologist said: “The first thing I did when I found out was Google the medications.”

The only medications that work are targeted at patients who suffer from migraines, which I didn’t have then. However, recently I have begun experiencing silent migraines. They seemed to show up late. But the ophthalmologist told me that the condition would wear out in two years.

There’s too much electricity there; it sends the wrong images to my eyes.

Two years later, I was still experiencing distortions every minute or so, so I was referred to see a neuro-psychiatrist - a specialist so specialised there’s only really one of them operating in Auckland, and it’s around $400 an hour.

He told me that the condition is life-long, if it hasn’t disappeared by now. He told me that there is no cure for it, and that it happened because the virus-induced fever I had damaged a part of my brain, causing the neurons to fire too fast. There’s too much electricity there; it sends the wrong images to my eyes. He also mentioned that he’d never seen someone develop Alice in Wonderland Syndrome alongside psychosis before.

In a way, it’s taken five years to understand and accept this condition. Now, I often enjoy the auras. I enjoy the shapes and distortions, even when my own skin changes colour. I enjoy seeing my cat with blue spots and a ghost-trail, or telling my partner that she has “many colours” around her – that she’d suit purple streaks in her hair. It’s one of my biggest compliments.

I don’t remember what normal vision looks like, but the difference is that now, I’m okay with that. There are hundreds of other people out there like me, accepting lifelong hallucinatory changes in their vision, living with it on a daily basis. And that is quite an achievement, I think.

* The author of this story has asked to remain anonymous.