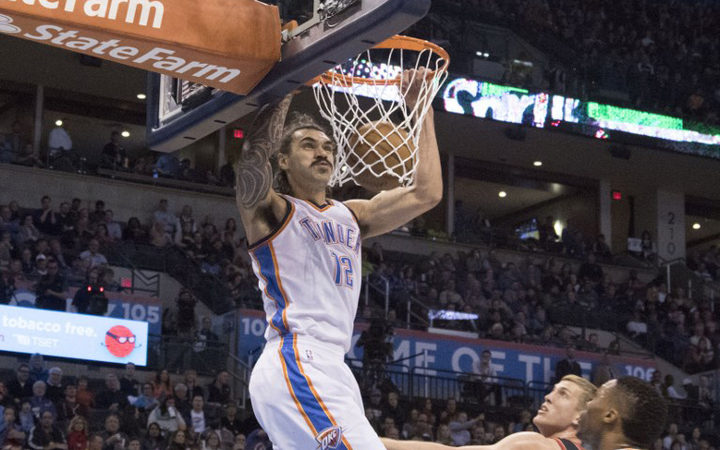 Steven Adams is back in New Zealand for the NBA off-season and today he launched the first of three basketball training camps that take place in Auckland, Tauranga and Wellington over the coming days. The day-long events are for 7-17 year-olds of all skill levels to learn from Adams and his Oklahoma City Thunder teammates André Roberson and Nick Collison.

This morning he also held a press conference at the North Shore Events Centre. We were there to hear him speak about his sister Valerie Adams, what it means for him now that Kevin Durant is part of the Splash family, and why having fun is the most important thing when it comes to playing basketball.

On his sister, Valerie Adams, who won silver in Rio:

“Everybody says it's disappointing [she didn’t win the gold medal], but it wasn't about the gold. She looked like she went out there and really enjoyed it. She just looked happy competing again. That's the biggest thing.

“I thought I worked hard, and a lot of people say I do as well, but seeing her work is on a whole other level. It's absolutely unbelievable. [She's] the most disciplined person in the world and just the hardest worker.”

How his role might change with Kevin Durant gone:

“It isn't up to me whether I'm going to say ‘yo, I'm going to do this’. It's the coach's job to put us in the best position to succeed, not only individually but as a team. So I'm just waiting for his word … [I might] shoot some threes.”

On introducing Andre Roberson and Nick Collison to NZ:

“We had a hangi yesterday at Rangitoto. It was mean; the boys enjoyed it. They loved the lamb and all that sort of stuff. They're trying to get used to the raw fish, but they'll come round to it. They really enjoyed the pōwhiri – the welcomings and stuff. They just find New Zealand people amazing in how respectful and how much they care about them being here. That's something that they're going to take away to America and really hold on to and remember New Zealand as.”

Why basketball wasn’t always his number one priority:

“I didn't actually like the game at first... I mainly fell in love with the progress; just seeing a little bit of progress made me feel like I had a bit of purpose in my life, as cheesy as that sounds. Because I was in a bad spot and I just didn't feel like anything. So once I saw myself grow, I just understood that I could grow to be something I wanted to be. And it wasn't an NBA player; I just kept working and I just wanted to see myself grow every day.”

Some words of advice for those wanting to go pro:

“Mainly just have fun with it, especially at this age... as long as they enjoy the game, they'll progress as they need to. The only thing that's going to get you through becoming a professional athlete – because it's really, really hard and you have to sacrifice a whole lot – is just weighing up if you enjoy playing. That's the biggest thing. As long as that weighs up more than all the sacrifices and pain that you have to go through, then you'll be fine.”

Watch all 102 of his slam dunks from last season (trust us, it rules):