Rua*, 17, sleeps on the streets of Auckland's CBD. He moved up from Wellington recently to start afresh. 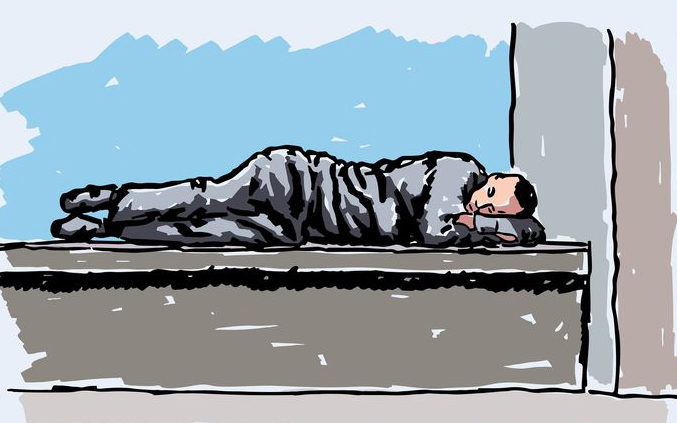 As told to Rebecca Kamm.

I was born in Wellington but I got a head injury from my auntie, so I went to CYFs after that.

My foster dad would abuse me sometimes, I used to go to school with black eyes and stuff. He didn't like me because they were white and I was the only brown kid in the family. I just lost it – I tried to kill him with a shotgun. So my foster family sent me back to my biological mum. They’d just had enough of me and sent me off: ‘See you later.’

They didn't contact CYFs, they just chucked me on a plane and hugged me and said "Goodbye, this is the last time we'll see you and talk to you." I still talk to them to this day, though. I try to have that connection.

It’s like dope, but it's got worse chemicals. They call it ‘bag life’ around here.

I hadn’t had contact with my mum for like, nine years. I found her on Facebook when I was 14. I added her and we talked for a little bit, then she sent me her number.

I tried to get to know her when I went back but I didn't really know her; I’d never really met her. After a year and a bit I started getting into drugs and gangs. I gave up on life, eh. I started self-harming, tried to kill myself a couple of times. I was meant to be living with my mum, but I was on the streets.

I moved to Auckland two and a half months ago to get away from the gangs and the crew and my family.

My family don’t care about me, they just try to confuse my mind. My auntie's telling me things I don't want to hear – she said she'd tried to kill me in the bathtub by drowning me. That’s the same auntie that gave me a head injury. She was a crack fiend, always on crack. My mum was telling me the complete opposite; she was saying my auntie was a nice person. And it's like, you don't even know your own sister, mum. You don’t even know her.

My average day is probably sleep all day, wake up, have a cone of dope or have a joint, then just go hustle – go to New World supermarket, an internet cafe, or go buy another bag of pot or synnies. It’s like dope, but it's got worse chemicals. They call it ‘bag life’ around here.

Lately I've been cracking it: two days ago I got $200 in one day. This man gave me a $100 note, then this woman gave me another $100 note. Just outside Hallensteins, up the road – that’s the only spot I hustle at. The lowest I’ve ever cracked is probably about $10 dollars. Lately I’ve been having my shit stolen off me. I had my hat stolen, my money, my bong.

I'm trying to keep off the street, eh. I'm sleeping on the street, but I'm sleeping at my bro's house at the moment, too – a friend. He lives on Anzac Ave; I sleep on his floor. Sometimes he sleeps on the street so more people can sleep at his place. I’m on a youth benefit, $175. I need an address to get it, so I’m paying $100 a week of rent in Wellington for a place I don’t even use. Then $25 goes onto my card for food. Then there’s $50 left.

I don’t want help, I just want to do it by myself. I’ve never accepted help before. ACC try to help me but I just say nah. I want to do it my own way. I’ll get there eventually, just when I’m ready. I’ve been to the Salvation Army, to Lifewise – I’ve been to heaps of places. I know they’re there but I’m just not ready to go to them. I think those places are more for older people. It looks like it's for older people. I look older, but I’m the youngest there. If some other kids came with me, then I’d go and talk to someone about my situation. But I’m the only 17-year-old there.

No one [in my family] knows I’m on the streets. I try to keep that hidden. The youngest kids you see on the street are 13. I’ve been thinking about being a social worker, eh. Or working at a residence. A youth justice residence. You know, I’d tell them, ‘Stop all this try-to-be-gangsta shit, being on drugs all the time.’ I’d get them around, chuck them a feed, then I’d probably stand up and tell them my life story.

*The subject's name has been changed to protect his anonymity.

If you are homeless or struggling with drug abuse, the following organisations are set up to help:

If you need to talk to someone about your own mental health, try these helplines. If it's an emergency, call 111.