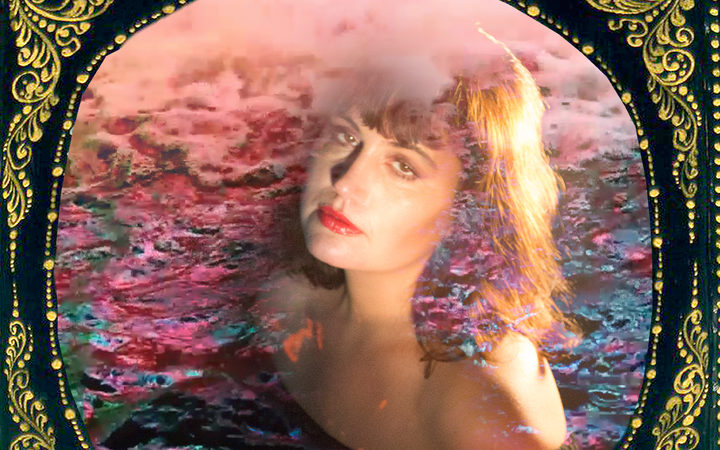 Mongo Skato blows me away. His beats are so beautifully tuneful, melodic and musically inventive. Jobin encapsulates everything I love about his music - it's music that makes me feel like one of these fluffy monster marionettes.

I'm not fond of irony. I find it to be by and large the territory of the cruel and the guarded, focussed on making people feel unwelcome via in-jokes and fostering a vibe of estrangement from emotional connection by way of a surface level engagement with the world. However! Though Eyeliner's music has been embraced as existing on an ironic level, I feel welcome and included by his music - there are markers of irony within his work but the nostalgic conjuring of reminisceses feels and is inclusive.

I like music with a strong melodic sensibility and if anyone knows how to write a hummable ditty it's Luke Rowell. Eyeliner has a light touch that warmly and fondly enlists both the uncanny and familiar elements of pop-culture. I don't get all the references of Eyeliner's music but it's beautiful enough that it can exist on multiple levels of appreciation. His affectionate music makes me feel happy; like toe tapping, like finding my jig. And it's catchiness - though alluding to the net of consumerist culture we're all caught in with its fast gratifications that finds us buy buy buying now - never makes me feel wrong for appreciating it on the instant noodles (yum) level or like I'm not sophisticated enough that I've missed the point.

His live performances are next-level performance art. They're refreshingly devoid of the self-consciousness and passive aggression. I <3 Eyeliner and this one's my favourite ever: new-age rave euphoria.

I grew up in a small town in the Waitomo district called Piopio. It's population count in 1996 was 612. My teenage years were pre-internet and, as such, access to music was limited to what I was learning on the flute, Juice TV, which I'd occasionally get to watch at parties (my parents TV could only pick up channels 1 and 2), tuning into stations on the drives to and from Hamilton for Waikato Youth Band practice on Fridays, and imagining the music I was reading about in Tearaway and Rip It Up.

I read about Garageland in those magazines and developed a musical crush on them. They seemed so cool! For a school English project in sixth form, I created a fantasy music festival called the 'Mountain to Sea Festival'  which I illustrated with a snowcapped pastel Mount Taranaki rising out of Koru waves that I spent a long time shading with coloured pencils. Garageland were the headline act.

The following year I began studying at Waikato University and finally heard Garageland for the first time on the student radio station there - Contact 89FM - and I fell in love with it and them. Being driven out of Hamilton on the way home for uni holidays I'd will the signal to last a little longer, play tapes my walk-man that I'd recorded of various shows once the signal had disappeared and try and try to pick up a signal once at home.

Garageland are tied up in a beautiful nostalgia I have for those times, which is funny considering their music invokes a nostalgia itself. It was the first guitar pop music from NZ I'd ever heard and I thought it the prettiest thing ever - those bittersweet '60s chords; the lyrics that spoke of relationship dynamics and '90s young adulthood that were still mysterious to a 17-year-old girl; music that made me dance and jump around on my student hostel bed and yell out "Sometimes I...LOSE IT!". Something about Come Back still gets to me, I've played it multiple times today on YouTube like I'm a 17-year-old girl pressing the little left pointing triangle button on my portable CD player back to the start of it all.

Over the last 18ish months, Ducklingmonster and Kraus became super important musical forces in my life. I'd sorta missed them for years as solo-mumming and dedicating myself to another stint at university meant gig-going and keeping up with all the happenings in local music took a back seat. Plus most of my 20s were pre-internet too, as I was always too poor to be able to afford internet access at home.

My first musical encounter with Ducklingmonster was seeing her play at Happy in Wellington with a band I can't even remember the name of on one of the weekends my son - Dell - went to his Dad's house. That show was awesome and I left it with one of the most evocative lyrics ever running through my head that I've thought of many times in the years that followed: Beth was chanting "it was so beige"- or at least that's what I heard - and I thought it a brilliant scathing encapsulation of people and things that strip away the sparkle of life and seek to dull peoples shine.

'Beige' fast became a favourite adjective of mine to describe things that bored and depressed me. 'Beige' was political ambivalence and my disatisfaction with the status quo and it attained even more meaning once I started to seriously delve into feminism in my post-grad studies (which later still helped me to seek to make music that was congruent with my ethics and feminism). I've had the pleasure of seeing Ducklingmonster perform several times since then and think she's a phenomenal experimental musician and artist, plus the support she gives to local musicians is outright beautiful.

My first musical encounter with Kraus was in spring 2014 when my son and I went to see him play his Wellington release of Interior Castle. It was election night and Dell was bored as anything and spent almost the entire show playing Minecraft on his tablet and occasionally giving me weirded out looks. Me though, I was enthralled. Kraus got on stage and he was wearing this t-shirt with a print of Beethoven framed in flames and I went "Oh my!" Then he started playing this beautiful Psychedelic Medieval Hybrid Music and I went "OH my!!" Then he picked up a flute and I went "OH MY!!!" and lost my shit.

Well no, I nibbled on the thyme sprig I'd tucked into my ring like it was popcorn at a movie and buzzed out that I was witnessing in one person a trilogy of some of my favourite things in the world. Arguably,  considering the election result, Kraus' performance was actually a harbinger of doom but, oh boy, what a way to see in another three years of our relentlessly cruel, oppressively beige government staying in power.

So, these two great talents together = Maltese Falcons. I love this song with its repetitive, minimalist bass foundation coming in and out of focus. Fuzzy guitar embellishments, beautiful pasing around of musical motifs between instruments, lovely surprise cuts and Ducklingmonster's vocals emerging as if from mist to being front and center and sounding like they're about to take flight. The first time I heard this song, I thought of Judy Garland singing Somewhere Over The Rainbow and the anguish and yearning that is communicated within her sweet and careful singing. Beth's delivery has a similarly free and contained quality; it feels like when you're a kid and you're leaping off the sofa trying to fly and each attempt you're sure it's going to happen but you keep ending up back on the carpet. But, for that moment, you're up...

Sisters Underground - In the Neighbourhood

What's not to love about this song? It is perfectly crafted. It bops along, the beat is excellent, the instrumentation melds together wonderfully and it invokes place, culture, and its 1994-ness while still sounding like it's brand new.

The layering  and interweaving of Brenda Makammeoafi and Hassanah Iroegbu's vocal lines and harmonies is beautiful. The production of this song is really something else but the foundation for this, of course, comes from that they are such great singers. Sisters Underground's raps are laid back, tuneful and summery like the song itself. With perfect flow, they incisively stroll through social commentary, humour ( "...and I'm out like bellbottom trousers" makes me smile every single time I hear it), autobiography, frustration, boredom and fun times all within three and a half minutes.

The music video for this song is a warm homage to South Auckland and would count amongst my favourite New Zealand music videos too.