New Zealanders have watched amused, baffled and mesmerised by Donald Trump’s rise -  but we may have missed some of the extreme political personalities closer to home. So what causes extreme populist politics, and should New Zealand expect its own populist to rise through the ranks? 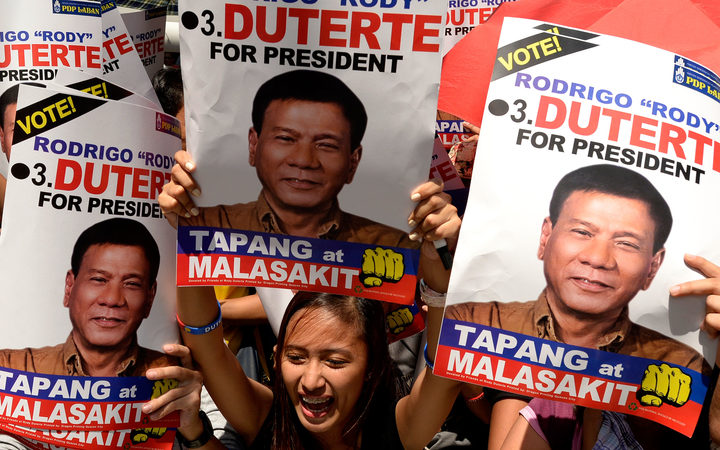 Rodrigo Duterte's supporters out for their candidate. Photo: AFP

Worried about Trump? Meet Rodrigo Duterte: known as “The Punisher”, Dirty Harry, The Trump of the East - and as of today, President-elect of the Philippines. The populist playboy, ex-prosecutor and law and order hardliner has run a profanity-laced campaign, boasting of viagra-fuelled affairs and death squad links - but the controversy has only boosted his popularity.

So what’s behind the rise in populist politicians? And is it a trend we should expect to see more of?

As mayor of Davao City, Duterte’s success in “cleaning up” the region is attributed to a policy of death squads executing petty criminals without trial. We’re not kidding - Duterte has long been linked to the Davao Death Squads, a vigilante law-enforcement group responsible for the murder of thousands of small-time offenders, gang members and drug addicts in the last 10 years.

"Am I the death squad? True. That is true,” Duterte said in a television interview last May - adding that if he became president, he would execute 100,000 criminals and throw their corpses into Manila Bay. When questioned about reports he had dropped a drug dealer from his personal helicopter, Duterte replied, “No-one was watching”.

But none of this has come close to derailing his popularity, and the Duterte campaign rolled to a resounding victory in this week’s elections. There are obvious parallels to Trump - the hard-line policies, the crude comments, the womanising rep. Duterte’s habit of publicly french-kissing female fans at political rallies earned him the nickname Duterte (as in dirty) Harry.

But like Trump, Duterte also presents as a man of the people, and an outsider to the political oligarchies that have long dominated Philippine politics.

Political analyst Geoffrey Miller says there is broader trend toward populist candidates rising when voters feel alienated by long-standing establishment politicians, and start looking for a breath of fresh air.

“Conventional politicians try to work within the system and aim to make incremental change over the long term,” he says.  “They are prepared for the long haul. But in doing so, they inevitably make compromises on their programmes - progress is often slow, change is ineffectual and voters do not feel their lives are improving measurably.”

“The frustration with this system can boil over and lead to the rise of politicians who have the one ingredient modern politicians often lack - authenticity.”

Young Kiwi Filipinos have watched the election from afar with a mixture of apprehension and bemusement.

Photographer Allen Carbon, 25, moved to NZ from the Philippines with his family when he was 11. He has his misgivings about the recent election results - but still believes Duterte has a better chance than the current government of turning things around for the Philippines.

“If he gets voted in. I'm sure he'll do way better than the ridiculous government we have now,” he says.

For Filipinos sick of endemic corruption and ineffectual political reform, Carbon says the appeal of a straight-talker - however offensive - is clear.

“He has this quote like: ‘I don't mind burning in hell as long as the people I serve live in paradise’. He just seems like he's here for the people and not for some agenda.”

In the Philippines, endemic corruption was the key issue of the election. The Philippines is ranked the third most corrupt country in the Asia-Pacific by Political and Economic Risk Consultancy. According to the UNDP, around 20 percent of the national budget lost to corruption each year.

Miller says when frustration grows at the failings of more traditional politicians, the stage is set for a Trump-esque shakeup.

Carbon agrees: “He's the extreme reaction to the extreme that is Philippines,” he says. “That's probably why a lot of people just support him - because a lot of people are frustrated with the system and the corruption. All my life my parents just told me how corrupt the government is and how easily bought out people are. So that's why I completely understand why he's so popular.”

And while Duterte is often presented as a boor, he’s also been unusually progressive in his policies, including unprecedented support for LGBT rights, gender equality, and a strong relationship with Moro Muslim Rebel groups and labour rights campaigners.

And as for some of Duterte’s more controversial policies?

“Well, I don't know how I feel about the death squads - it just seems so crazy,” Carbon says - “It’s seriously like having a superhero like The Punisher come in  - and in comics we cheer him on. But now that it’s real, it’s like aww man.”

He’s surprised that the controversy hasn’t hurt the campaign - but according to Miller, voters’ frustration and demand for authenticity mean that behaviours which once would have been considered campaign-ending political gaffes can actually add to the candidates’ appeal.

“It means that supposed scandals such as extra-marital affairs or off-colour jokes can actually help, rather than hinder them, as it shapes the image of them as ‘ordinary people’ rather than the familiar elite,” he says. “Contradictions in populists are often interpreted as signs of this genuineness, rather than flaws - they are like real people, warts and all, rather than the manicured and carefully managed professional politicians.”

While Miller believes a candidate in the Duterte mould is still a long way off for New Zealand, he says it’s not an impossibility.

He believed the increasing number of career politicians in New Zealand and the lack of diversity in their  backgrounds is laying the ground for a populist backlash.

“Populists are fundamentally refreshing. And the blander conventional politicians become, the more success populists can have. This is why we can expect to see more of them in the future.”

“Given the right circumstances, I see no reason why a populist movement could not be successful in New Zealand as well.”