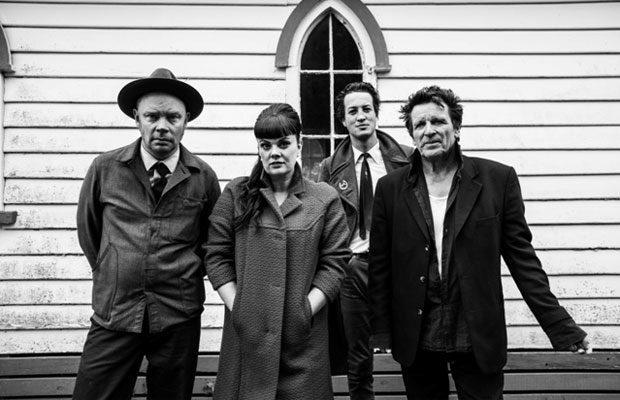 The ex-Altar boy in me felt like a bit of a badass going to see a live gig in a church. But what a church it is! Old St Paul’s is a beautiful space and with the warmth of native timber and pews filled with fans, the air was electric before any of the musicians had even set foot on stage.

The group opened the night, their sixth of the tour, with ‘Travelling Creature’, a song that Delaney and Marlon performed together on Sad But True (The Secret History Of Country Music Songwriting Volume 1). Dave Khan was on mandolin, and later guitar, piano accordion and violin; Ben Woolley held things steady on bass guitar while Joe McCallum added depth on the drum kit. Seven people on stage meant the song was bigger and warmer than the original, with the lush vocal harmonies during the choruses a wonderful addition to the show.

The four stars took it in turns to showcase their wares and first up was Barry Saunders. The Wellington local opened his set with ‘One Red Morning’ matched with red lights shining on the arches of the church interior. Davidson and Williams then joined him on guitar and vocal harmonies, easing into the evening with a gentle stroll through a few country numbers.

The songs Saunders sings have a strong sense of place and feeling of old New Zealand. He seems as though he’s been a musician forever and at one point he described a (perhaps drunkenly enthusiastic) audience member joining the band on stage as a “perfumed bulldozer”. He’s the type of musician your aunt and uncle would love and sway along with after two glasses of wine. One that sounds familiar and welcoming in the way that a local pub would.

Next on the stage was Tami Neilson, opening with her APRA Silver Scroll winning song ‘Walk (Back To Your Arms)’, with Khan, Williams and Woolley providing doo-wop style backup vocals. She then lightened the mood with ‘Woo Hoo’, originally recorded with Williams on Dynamite, but this time accompanied by Khan who sang and played the mandolin with breezy effortlessness.

After a brief intermission, Delaney Davidson stepped to the stage starting his set with old American folk blues standard ‘In the Pines (Where Did You Sleep Last Night)’, a song from his album Self Decapitation. Davidson utilised looping techniques and layered vocal harmonies, while humming and groaning sounds over each other to create a darker atmosphere than anything we’d heard previously.

But the loudest applause of the night went to Marlon Williams. His set began with Tami Neilson singing ‘O Holy Night’, before he joined her reciting the carol in Te Reo. As their voices wove higher in the church, the audience could not deny that we were experiencing something special.

Williams was joined by Khan, McCallum and Woolley for an acoustic rendition of the Stanley Brothers’ bluegrass tune ‘If That’s The Way You Feel’. Voices and instruments filled Old St Paul’s with bittersweet sorrow before Williams declared he had “one more song before the rest of the crew come out for one last hoorah. This one is… not a hoorah”. Showcasing just how wonderful his voice is, he launched into the Nina Simone classic ‘When I was a Young Girl’.

With everyone back on stage they rounded out the evening with The Warratahs hit ‘Hands on My Heart’ and ‘Texas’ from Neilson’s Dynamite, a song for her three-year-old son Charlie. The Lost Highway Tour show finished with ‘The Hearbeat Lingers On’, a song performed by Davidson and Williams in the past, but here it was filled out with six voices and a full band to create a magnificently complete and whole sound.

For those of you in Christchurch and Dunedin, the final stops on this tour: Get thee to a church. These artists, those who have been playing for decades and those new to the New Zealand country music scene, really are something special.