It’s not even a planet anymore (something some people are still very bitter about), but Pluto has been making headlines for the past couple of days. 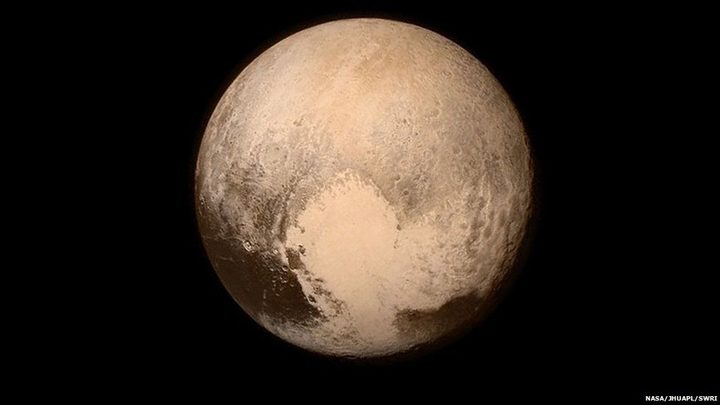 The most detailed image of Pluto yet Photo: NASA/JHU APL/SwRI

New Horizons, a space probe launched to study Pluto and its moons, flew past Pluto this week, coming close (within about 11,000 kilometres) of the dwarf planet’s surface. Scientists saw cliffs, icy mountain ranges, canyons and evidence of water ice.

A new close-up image of an equatorial region near the base of Pluto’s bright heart-shaped feature shows a mountain range with peaks jutting as high as 3,500 meters above the surface of the icy body, NASA says.

Michele Bannister is a New Zealander, and a planetary astronomer at the University of Victoria in Canada - she researches outer space.

And she’s giddy about everything she’s been seeing. “During the press conference…I was pretty much falling off my chair and jumping up and down every time they put a new image on the screen.”

Pluto has been an unknown for a very long time. “We’ve gone from a place that for 85 years has been a point of light where even the Hubble telescope couldn’t get more than two pixels across the surface, to this place with mountains and polar caps, and almost no craters.”

Today, the @NASANewHorizons team is bringing what was previously a blurred point of light into focus. pic.twitter.com/AswUMZFxqd

Dr Bannister describes Pluto as having an “astoundingly young surface”. Scientists had expected to see lots of craters, from the planet being bombarded for million years. Instead, she says, the planet’s surface is quite flat. “We’re seeing this place that’s just so geologically active. It’s so exciting.”

Some of that, she says, is geology modifying the craters over time. “So, Pluto has an atmosphere, and it has seasons, and part of the seasons is due to Pluto coming very close to the sun and then very far from the sun on this big elongated elliptical orbit that it has.”

In the same way that on Earth we have the water cycle – water evaporates from oceans, lakes and rivers, forms clouds, and they condense and rain falls – scientists expected something like that to be happening on Pluto.

“We thought that there should be some level of the very tenuous weak nitrogen atmosphere, as it comes close to the sun, the atmosphere will puff up, a bit of the nitrogen will evaporate off the surface, then as it goes out away from the sun again, you’ll get snow, so there’ll be little fluffy blankets of nitrogen frost, and methane frost, coming down and covering things gently.”

“So that would soften up the edges [of the craters] up a little. So it’s not like we’re seeing softened edges, we’re seeing flat plains, that’s incredible.”

The high-res images also show rugged-looking mountains with sharp edges. “They look like there hasn’t been billions of years of erosion, of little things hitting them and chipping bits off the side and flattening them all out,” Dr Bannister says. 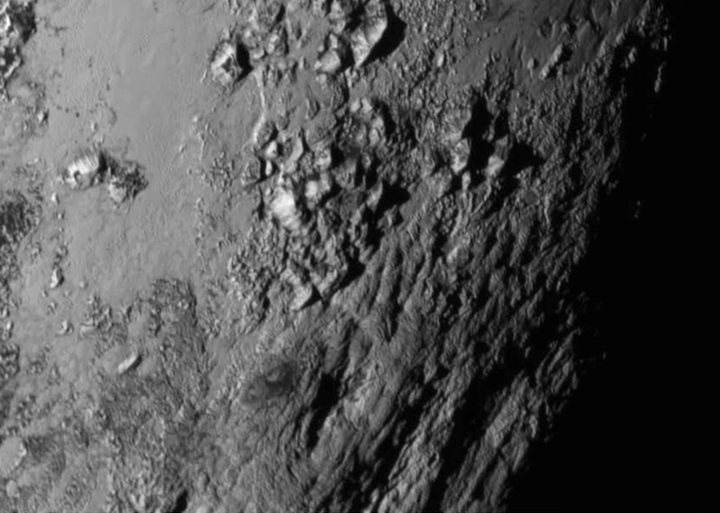 The mountains, relative to the low gravity on Pluto, are of the scale where they’re twice the height of the Himalayas.

“So these are huge mountains. So they’re probably water ice as as the bedrock. Maybe there’s some rock underneath it, some silicate rock (like on Earth) but at the moment it seems more like water ice.”

As well as Pluto, New Horizons also caught a glimpse of one of its moons, Charon. “The enormous mountains of Pluto are astounding, but in some ways the level of variation, just the differences across Charon, they’re blowing my mind,” Dr Bannister says.

“It’s too small to really hold any atmosphere, so you wouldn’t expect any of these frost settling kind of processes, that smooth everything out.”

That means, like the pictures being sent back from Ceres, Charon should be covered in craters. And yet, that’s not what the pictures appear to show.

In the middle of Charon is a cliff line, that has some of the biggest canyons in the solar system. “It’s a big enough canyon that it’s actually making a big notch in the limb when you look across the side of Charon. So it’s, in a geological sense, an active world. There are things that can move and break the surface.”

New Horizons still has sixteen months of explorations ahead of it, right on the edge of our solar system. The data sent back over the past couple of days is just a snippet of what it’s collecting.

“Pluto is a long way out from where we are here on Earth and the probe itself is running on a lot less power than a microwave oven, Dr Bannister says.

“So the amount of strength of signal it can send, even with the big satellite dishes we have, listening to this tiny little weak signal that’s trickling its way back from the edge of the solar system, we don’t even have 24k dial up modem level of data coming back here.”

Until that data gets back, Pluto is incredibly meme-worthy. From Miley's Wrecking Ball, to the XKCD treatment, to commentary on the US Presidential race. And, of course, the inevitable comparison.

Here's the latest shot of Pluto, with the Death Star for comparison. That's no minor planet! pic.twitter.com/YIut7nLleH