Zane Lowe’s DJ set in the typically quiet twilight slot at Rhythm and Vines 2013 was so well received that he was promoted straight to one the festival’s most coveted slots this time around – the very first of the new year. Quite the responsibility, in his view.

“You know that you’re part of something which is of universal importance on a New Year’s Eve show, because everyone’s got some emotion flowing through them," Lowe says, "Everyone’s going through vibes, so you’ve got to choose your records wisely.”

WATCH: Zane Lowe sits down with Ollie Neas and Molly McCarthy at Rhythm and Vines

But based upon a decade or so of success, Lowe seems just the man for the job. Having made a name for himself in New Zealand in the hip-hop group Urban Disturbance, and then later in Breaks Co-Op, Lowe has forged a successful career in London as a DJ on BBC’s Radio 1 and as a presenter on MTV Two. Through his show on the BBC, Lowe has played a part in launching the careers of Gnarls Barkley, Arctic Monkeys and Mumford and Sons, to name a few.

But while he is best known for his on-air DJing, Lowe is no stranger to live audiences, having performed as a DJ internationally for a number of years. Indeed, Lowe says, there are “parallels” between how he performs in the studio and who he is on stage. 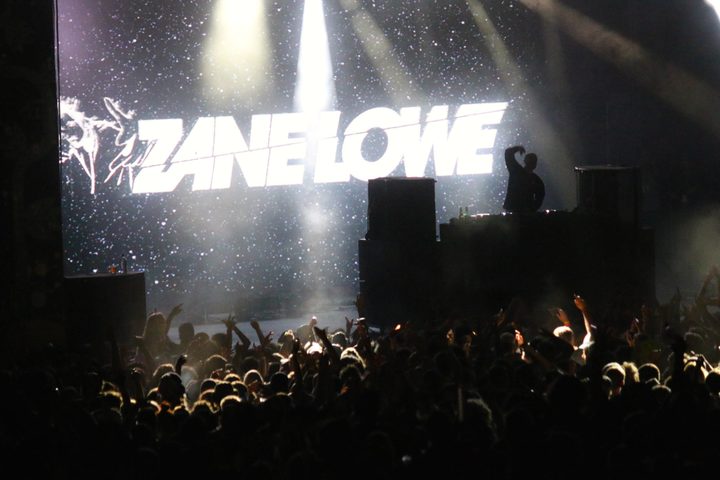 “Whether it’s being on radio, making music in the studio, producing, going on stage, anything music related is one single organism that lives at different times, in different ways. So it’s a similar energy.”

In fact, he says performing for live audiences has improved his work on the radio. “I’ve been able to see how people react – what’s working. It really keeps me sharp on dynamic in terms of how to give music flow. I try to give it a really good two hour flow while I’m on air, make sure the music rolls through different tempos, different feels, different vibes.”

This year, his sense of responsibility as Rhythm and Vines midnight DJ led him to one particular corner of the musical spectrum. His plan: to play “very hard, very heavy records”. As the crowd roared beneath the last of the fireworks, it seemed this was exactly what the punters were after.