How much would you pay to save a life? Not necessarily your life, nor the life of someone you know or love. Just a life: Joe Bloggs, Jane Doe, the guy from the bus, the high school friend you don’t speak to any more. Think of a figure, round it to the nearest hundred thousand, put a dollar sign in front, and we’re done. With a simple, arbitrary sum that quantifies, to your mind, the existence of another human, you’ve reached your own personal ‘value of life’.

It sounds callous, but this is essentially how government agencies have determined what you're worth for more than two decades now. The Value of Statistical Life (VoSL) was developed by the Ministry of Transport in 1991 as a way to measure the country's loss of life in dollars. The figure was initially set at $2 million, and was based on the findings of a survey that asked approximately 600 people what they would be willing to pay for various improvements in road safety. From this, a value was determined to represent what an average person would be willing to pay to reduce the risk of death in road accidents. In crude terms, the state had estimated it would be $235,000 better off for every person that didn’t die. 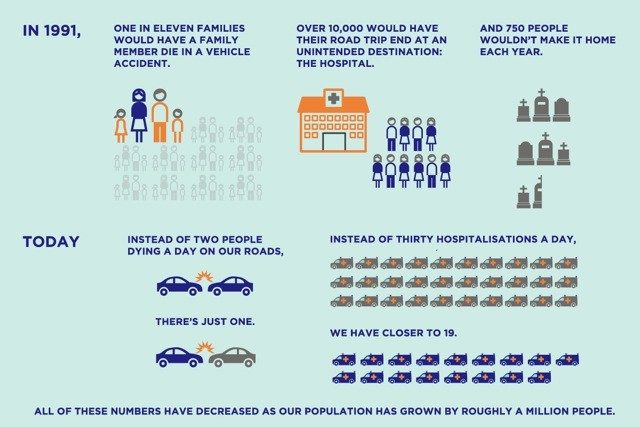 However, this figure threw cost-benefit analyses for seemingly straightforward infrastructure projects; for example, the old metrics (prior to the VoSL) said it didn’t make sense to do things like paint white lines on the sides of rural South Island roads, or to put guard rails between a split-level section of State Highway 1 just north of Wellington, where south-bound traffic could careen on to the north-bound lanes below with deadly ease.

The problem lay with the numbers.

“What had happened in New Zealand was, the [old method] was out of kilter. They knew that they needed to move to a more modern method,” says lead author of the original study Ted Miller. At the time a ‘willingness-to-pay’ approach was gaining traction as a measure for costing life and death, and on the strengths of the findings of the VoSL study, the Ministry switched to the $2 million figure. It had an immediate result. Anecdotally, Miller says, projects that had been given borderline cost-benefit analyses under the old measure suddenly became far more worthwhile on paper, and were given the green light. South Island farmers were then able to see the edge of the road when driving home at night, and Wellingtonians were able to drive past Tawa with a little less unease than usual.

The VoSL measures willingness to pay to mitigate one kind of death and a very specific risk which is road safety – we have no idea if this easily transfers to others.

Used as a tool for the government’s toolbox, the VoSL is now the firmly entrenched status quo and approaching a quarter-century of use; but it was introduced to New Zealand in an era that differs in many ways from the one we live in now; the original study states: In 1991, one in 11 families would have a relative die in a vehicle accident and 750 people would die on the roads each year on average; more than 10,000 would be hospitalised.

Twenty-three years on, just one person dies on our roads each day and instead of 30 hospitalisations, there are about 19; that’s despite a population increase of about a million people. Of course, such improvements can’t be put down to the VoSL alone – cars are safer, drivers are better trained, licencing is more stringent. On net, it’s been a highly effective tool.

Other sectors that use similar systems include ACC, theirs is called Quality-Adjusted Life-Years (QALY) and the public health system also uses a VoSL-type model, their additional systems are similarly titled Value of a Statistical Life-Year and Disability-adjusted Life-Years.

It would seem the original Ministry of Transport system reflects an assumption that people’s willingness to pay to save a life doesn’t depend on the cause of death, this assumption seems flawed and stood out when a study on house fire safety in 2007 recommended a lower VoSL than the one used by the Ministry of Transport. In the United Kingdom, a higher VoSL has beenrecommended specifically for cancer, to reflect the extended suffering usually associated with such deaths.

Take the figure you thought of at the start of this article. Does it reflect how much you’d pay to save the life of a cancer patient? Does it change for a drunk driver? What about a victim of the Christchurch earthquake? The answers to all of these questions will depend on your experiences, your values, and your fears. The VoSL measures willingness to pay to mitigate one kind of death and a very specific risk which is road safety – we have no idea if this easily transfers to others.

The second assumption this method makes is that our priorities don’t change over time. Will the figure you first thought of be different in 20 years? The chances are, you don’t know – there are too many variables, from your income, to how much you use the road, to your values and views – and that’s completely valid. But should we expect more of policymakers?

New Zealand's VoSL figure is based on the perceptions, priorities and values of people who answered a survey when ‘Ice Ice Baby’ was number one on the charts. The updated $3.85 million figure, changed in 2013, assumes that the only thing that affects people’s willingness to pay is their salary. Whether that’s unfair isn’t known, it simply hasn’t been studied, and expert opinions differ:

If you decide to jaywalk, or to drive at 110km/h, you’ve weighed up the increased risk against the time saved from walking to the nearest crossing or keeping to the speed limit.

Jagadish Guria, an author of the original study,believes a review of the figure is long overdue; he is in favour of a new study, to better reflect the values of modern New Zealand. “It would be better to have a more recent value, based on scientific approach,” he says.

In the late 1990s, Guria led a study that produced estimates intended to replace the 1991 figures. The study was “more comprehensive”, he says, and generally “better”. But the National Road Safety Committee could not come to a decision on the revision, and the whole study was shuttered. Guria blames the “very unfortunate” outcome on the panel’s inability to reconcile conflicting views and priorities – some panel members favoured safety improvements, while others were keen on road construction and increasing the time-value of roads.

Miller (who was not directly involved in Guria’s second study) believes Guria's report itself was also to blame. He says it was “very academic” and not written in the (simplified) language of policy-makers. Additionally, Guria's study attempted to advance policy literature as well as create a measure for practical use. Of all the countries that use similar ‘willingness to pay’ type-measures, New Zealand has some of the lowest estimations reflecting value of life. Our $3.85 million figure sits at the bottom end of a range which starts $3.2 million and reaches $7.1 million. (Though, in fairness, the disparities roughly even out once the GDP is factored in.)

The reality seems to be that revising the VoSL isn‘t a priority for anyone, though Guria would disagree with this idea. In the 14 years since his follow-up was shelved, nothing much seems to have happened in terms of a more accurate system of tracking value of life; and the Ministry has no immediate plans to return it to the table. “In the short to medium term, the Ministry and the NZ Transport Agency will be commissioning VoSL-related research around valuation methodologies,” says Tim Herbert, the Ministry of Transport’s manager of financial, economic and statistical analysis. There is funding earmarked, but no set timeframe for when and how this will influence a VoSL improvement or alternative.

Chances are the very exercise of reaching your own figure made you uncomfortable. To some extent, ‘willingness to pay’ approaches like the VoSL commodify existence, as the original 1991 report acknowledged: “Is it morally offensive to reduce human life to dollars and cents? Perhaps, but how else can we make rational public investment decisions”. That’s not a question, nor a resignation, but a justification.

Though he does not take moral issue with using the tool, Guria thinks the term ‘Value of Statistical Life’ is a misnomer. He prefers “value of risk deduction”. “People don’t like ‘value of life’. Life is priceless. We cannot put a value on it. [Instead say] we have resources to spend, okay – we can improve road safety, but it costs money, how much will you pay to reduce risk?”

Miller is more concerned about the tool’s morality. He feels that while the exact figure of the VoSL might be up for debate, the concept isn’t. “It’s the right method,” he says. “I think not [using a VoSL measure] raises the moral questions … otherwise, safety decisions are made by the seat of the pants. A measure [like VoSL] shows us how we can best prioritise funds … it creates equitable decision-making.”

No matter how unpalatable we might find it, people place a hypothetical value on things all the time. If you decide to jaywalk, or to drive at 110km/h, you’ve weighed up the increased risk against the time saved from walking to the nearest crossing or keeping to the speed limit. It’s a cost-benefit analysis like any other; equating time with money is just an adage away.

And it’s not just the public sector that bases decisions on such moral algebra. In 1978, Ford decided not to recall a batch of faulty cars after it found that the cost of litigation and compensation for an estimated 180 wrongful death suits would likely be less than the cost of the recall - $11 per car.

Also in the US, large corporates have been taking out life insurance policies for their employees so that in the event of an employee death, the company – not the employee’s family – will be paid out. Online, you can find tools which quantify how much your life or body is worth, and no less than three tools monetise your Twitter account. Heidi Klum’s legs were reportedly insured for $2 million in 2004, Rihanna’s $1 million in 2007. These might be tenuous examples, but they go to show that a monetary sum can be attached to anything of any kind of value.

Is the VoSL working? The results of cost-benefit analyses seem to say so. Is the figure in the right ballpark? Based on international evidence, yes. In 2014, is it accurate? Probably not. Putting a price on life is a messy science – especially given that the priorities and values of the public are at the heart of it.

Think back to your figure again. Could you tell the family of someone who died on a poorly-graded road that society wasn’t willing to pay the extra $50,000 that might have saved their son or mother or cousin? Luckily, we work in averages, and those kinds of hard questions become aggregate figures down the columns of a spreadsheet. Are the numbers in the columns correct? Do they match up with what we, as a society, want and value in 2014? Well, there’s no figure for that.