One of the best things about sport is that it creates memories. You hold on to them when times get tough. This became obvious to me when I played a bunch of guys for whom sport was one of the precious few things they had.

A little over a couple of years ago I moved to Auckland. Winter rolled around and I started looking for a rugby club to play for, but I had no car and the closest club was a fair hike from the design school. One night I was wandering past Victoria Park and saw the Ponsonby Rugby League Club training. I thought I’d give it a go.

I was pretty unfit, having done no pre-season work, but they welcomed me into the second side and chucked me out on the wing. My first game was pretty uneventful – we gave Northcote a fair drubbing and I got a few hit ups and made a few tackles. Given that my exposure to league was entirely based on watching the NRL and one training session, I thought it went pretty well. After the next training the coach called us in for a meeting.

“For those of you who don’t know, we’re playing at Pare so the game’s on Sunday. Make sure you go through the main gate and that’s there’s nothing dodgy in your cars.”

I’d heard people say “Pare” before. It was short for Auckland Prison, Paremoremo. I asked the coach if we were playing the guards or something. Nope, the inmates. He told me not to worry, it’d be the cleanest game of anything I’d ever play in my life. I took his word for it, even though I knew that just about the only other way to get into Pare would be a prison sentence.

Rows of windowless concrete blocks topped with even more razor wire. It dawned on us that this is where the guys we were playing actually lived.

We had to play on Sunday because that’s the regular prison visitation day. We had a few jokes as we drove up about if we had to get changed in a cell and sharing showers. The jokes stopped when we turned the corner to the front gate.

Auckland Prison is about a half-hour drive from the city but it feels like you’re in the middle of nowhere. From the outside it’s difficult to actually see the buildings because of the amount of razor wire that surrounds them. Once we had our car searched and drove through the grounds, I realised the wire had been blocking the view of possibly the most depressing structure I’d ever seen. Rows of windowless concrete blocks topped with even more razor wire. It dawned on us that this is where the guys we were playing actually lived. To make things even bleaker it was a cold, windy day and the sky looked the same colour as the cell block walls.

Our changing room turned out to be not too far off from a cell and we pulled on our gear and headed out to warm up. The field had about half a dozen guards surrounding it and, despite only getting one game’s use a week, was not in great condition. It had already turned muddy and I realised I’d made a serious error of judgement by not bringing my longer sprigged boots. Warm up went well, but we couldn’t see our opposition. They’d chosen to get ready behind a fence on their side of the field. 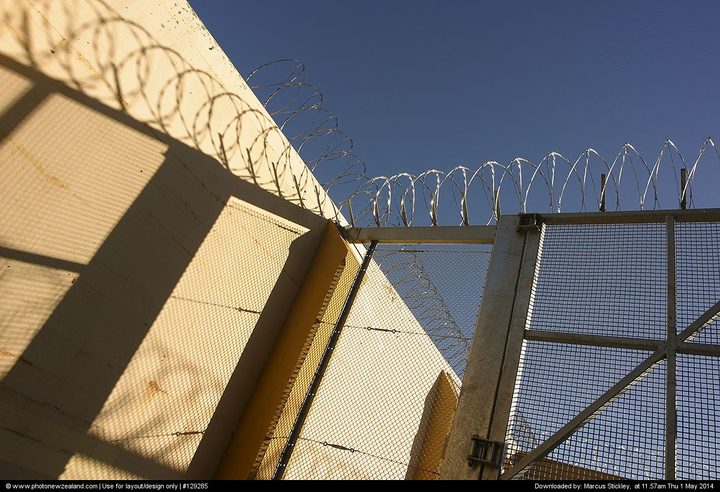 "I don’t know what any of them had done to be in prison and I sure as hell wasn’t going to ask." Photo: PhotoNZ

The ref blew his whistle and, slowly but surely, a line of men with chests puffed out marched onto the field, barking encouragement to one another. We advanced toward them in a similar fashion from our side of the field. In league there is a curious tradition of lining up alongside one another and shaking hands with the opposite player. It was at that moment I started to wonder what they’d done to be on that side of halfway while I was on this side. Before we peeled off to set up for the kick-off, their captain stepped forward.

“Ponsonby, just before we get into it, I wanna say thanks for coming out here. We all really appreciate it. Let’s have a good game!”

He picked me up and drove me into the turf like I was made of balsa wood.

The game began well for us. We dominated possession and got a scored off some back-to-back sets. Best of all, the guy I was marking was about half my size. I was feeling like this was going to be a cakewalk, but that all changed after about 15 minutes.

In our grade there was unlimited interchange, so players can go on and off for a rest whenever they like. I was setting up to take a hit up off a scrum and fancied my chances against the little winger marking me. When I got the ball and looked up, though, he’d been replaced by a 6’4” Pacific Islander who looked like he’d been carved out the side of a mountain. He picked me up and drove me into the turf like I was made of balsa wood.

The game turned after that. Their captain, who had thanked us for coming before the game, showed even more appreciation by flinging into contact with as many of us as possible. That got their tails up and the rest of them followed suit. Every time we got the ball their tackles stung and we couldn’t even get out of our own half. Their basic but effective tactics paid off and they scored three quick tries.

At the half-time break Coach told us not to worry – they’d get tired, just keep tackling and stick to our game plan. We did just that and clawed our way back thanks to a superior kicking game and a few key mistakes by them. It was a hard slog but we gained the upper hand and going into the last quarter had sealed the match. After we walked back from another try I passed their sideline and was handed a water bottle and given a pat on the back by one of their interchange players, a big Maori with an ill-fitting jersey and a big smile on his tattooed face. “Looks like you boys are just too good today.”

Hopefully, he said with a laugh, this might be his last season on the team

I smiled and handed the bottle back. “Thanks man. You guys keep playing like this and you’ll be hard to beat next time.” He laughed and apologised for the state of the field. I said don’t worry about it, that compared to Wellington fields this was paradise. His eyebrows raised, and he said he was from Wellington too. Before I could ask him who he’d played for back home, it was time to kick off again.

Before the end of the game I was called into play one last time. The ball got spread wide to their gigantic winger, who up until then I’d done a reasonable job of keeping under control. He got a bit of a run up and swerved on the outside of me, which worked out perfectly as my boots couldn’t cope with the mud and I fell off balance. He brushed me aside and scored in the corner. I was lying face down in the mud, feeling more than a little stupid when he came back and tapped me on the shoulder. He outstretched a crudely tattooed hand and helped me up.

After the final whistle their captain, who had battled so hard, asked us if we could join together in one joined huddle to give each other the obligatory cheers. I walked up to him after and told him that he’d played a great game. He told me that Sunday afternoons were the high point of their week and that it helped them get ready ‘when it’s all over’. Hopefully, he said with a laugh, this might be his last season on the team.

That’s the bit that stuck with me. I don’t know what any of them had done to be in prison and I sure as hell wasn’t going to ask. I found out from one of the guards that all the players had to be over a certain age, have no more gang affiliations and be passing certain standards in their rehabilitation programs. If there was any foul play reported by the referees then the team would be kicked out of the competition, which made it self-regulatory because prison wouldn’t be a fun place to be if you were the guy who ruined the high point of everyone else’s week.

Coach was right; it was the cleanest game of anything I’d ever played. It was full of handshakes, compliments and was played in the spirit that nostalgic old timers get misty-eyed over. We went back to Paremoremo for our last game of the season that year and my prediction turned out to be accurate. They had improved and beat us fair and square. I’ve never seen a bunch of guys happier in my life.