A young Māori activist has told delegates at a massive UN summit in Scotland the world's climate crisis has its roots in colonialism and that the solution lies in abandoning modern-day forms of it.

India Logan-Riley was asked at the last minute to speak at today's opening session of the COP26 summit in Scotland.

They said indigenous resistance to resource exploitation, corporate greed and the promotion of justice had led the way in offering real solutions to climate chaos.

Addressing delegates today, the young activist fearlessly linked imperialism's lust for resources and its destruction of indigenous cultures centuries ago, to modern-day enablement by governments of corporate giants seeking profit from fossil fuels at any cost.

Logan-Riley said the roots of the climate crisis began with imperialist expansion by Western nations and reminded Britain's leader Boris Johnson of the colonial crimes committed against subject peoples, including those in Aotearoa.

Māori and other indigenous people had been forced off the land so resources could be extracted, Logan-Riley said.

"Two-hundred-fifty-two years ago invading forces sent by the ancestors of this presidency arrived at my ancestors' territories, heralding an age of violence, murder and destruction enabled by documents, like the Document of Discovery, formulated in Europe.

"Land in my region was stolen by the British Crown in order to extract oil and suck the land of all its nutrients while seeking to displace people."

Logan-Riley said the same historic forces continued to be at play in Aotearoa, citing the example of the government's "theft of the foreshore and seabed" and subsequent corporate drive to extract fossil fuels.

They expressed frustration that after being lauded at the Paris talks five years ago for relaying climate warnings of wildfires, biodiversity loss and sea-level rises, nothing since had changed. "The global north colonial governments and corporations fudge with the future," they added. 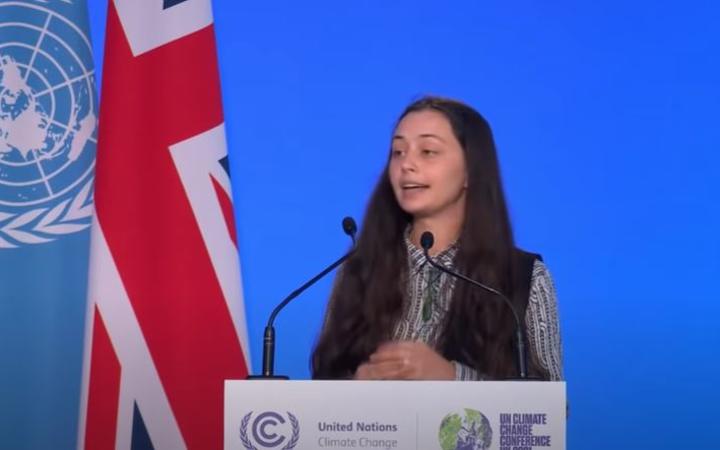 Logan-Riley said world leaders needed to listen to indigenous people as they had many of the answers to the climate crisis. Their acts of resistance had already played a part in keeping emissions down, they added.

"We're keeping fossil fuels in the ground and stopping fossil fuel expansion. We're halting infrastructure that would increase emissions and saying no to false solutions," they said.

"In the US and Canada alone indigenous resistance has stopped or delayed greenhouse gas pollution equivalent to at least one quarter of annual emissions. What we do works."

Failure to support such indigenous challenges to the "colonial project" and acceptance instead of mediocre leaders means you too are complacent in death and destruction across the globe, Logan-Riley warned.

The comments come as other climate activists criticise the G20 summit on climate action ahead of the COP26 meeting.

Italian Prime Minister Mario Draghi, who chaired the Rome gathering, today hailed the final accord, saying that for the first time all G20 states had agreed on the importance of capping global warming at the 1.5C level that scientists say is vital to avoid disaster. As it stands, the world is heading towards 2.7C.

G20 pledged to stop financing coal power overseas, they set no timetable for phasing it out at home, and watered down the wording on a promise to reduce emissions of methane - another potent greenhouse gas.

The final G20 statement includes a pledge to halt financing of overseas coal-fired power generation by the end of this year, but set no date for phasing out coal power, promising only to do so "as soon as possible".

This replaced a goal set in a previous draft of the final statement to achieve this by the end of the 2030s, showing the strong resistance from some coal-dependent countries.

The G20 also set no date for phasing out fossil fuel subsidies, saying they will aim to do so "over the medium term".

On methane, which has a more potent but less lasting impact than carbon dioxide on global warming, leaders diluted their wording from a previous draft that pledged to "strive to reduce our collective methane emissions significantly".

The final statement just recognises that reducing methane emissions is "one of the quickest, most feasible and most cost-effective ways to limit climate change".

"I just wanted to really convey that the negotiations are the same age as me and emissions are still going up and that needs to stop right now," they said.

Logan-Riley had opened their address in te reo before telling delegates they resided on Aotearoa's east coast, where the sun had turned red in February last year because of smoke from wildfires in eastern Australia.

The activist relayed a story about supporting their brother in hospital being told by the doctor there staff were seeing higher numbers of people presenting with breathing problems because of the smoke.

"In that moment our health was bound to the struggle of the land and people in another country. In the effects of climate change are fates intertwined, as our the historic forces that have brought us here today," they said.