About 1500 people took part in a hīkoi to the steps of the Far North District Council offices in Kaikohe today, where staff have pushed pause on plans for significant natural areas (SNAs) following a massive backlash within the community. 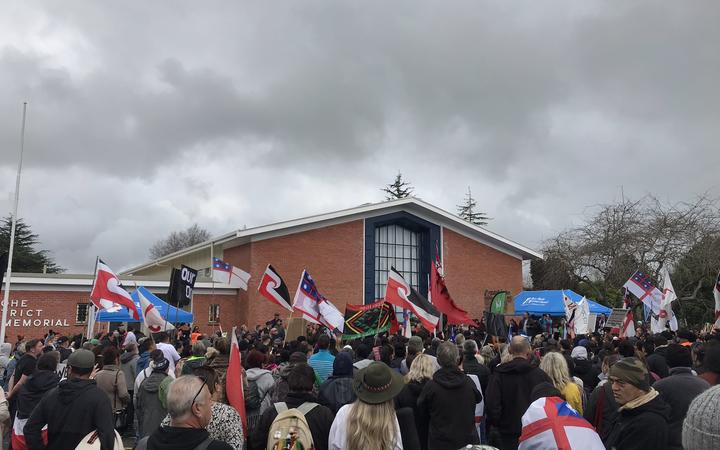 A hikoi of about 1500 in Te Tai Tokerau march against the Significant Natural Area plan. Photo: RNZ / Nita Blake-Persen

Tamariki and kaumātua led the hīkoi with iwi, hapū, whānau and farmers from across Te Tai Tokerau joining in their opposition to planned land changes.

While the pause gave some relief, the message from marchers was crystal clear - they wanted the SNAs to be scrapped altogether.

Hinerangi Cooper Puru at the age of 84 led calls to abandon the reclassification of huge amounts of land in Te Tai Tokerau.

It had been 40 years since her mother Dame Whina Cooper's march to Parliament from the Far North, where she had been protesting the significant loss of land, culture and sovereignty that Māori were facing at that time.

Now decades later her daughter was doing the same.

Puru said today's march showed the fight has not changed - and she wanted the SNAs gone all together.

"The SNA must not be paused; it should be gone... it's our land, not theirs, for goodness sake.

"That is real treason to us," she said.

Forty-two percent of land in Northland had been proposed to be turned into SNAs due to its unique biodiversity.

Yesterday, Far North District Council agreed to halt the SNA plans after a meeting with government ministers but the council said it would not make any final decisions until after the National Policy Statement on biodiversity was finalised.

This was expected to happen in July, but Te Poari o Ngāti Wai chief executive Hūhana Lyndon said she wanted to know what would come next.

"The challenge for council now is how are they going to honour the articles of Te Tiriti o Waitangi and engage with us for real about what does the tiakitanga of our whenua look like moving forward.

"We don't oppose the fact that we all want to look after our land but the mechanism by which the Crown has sought to impose this regulation upon us - without our consent," she said.

Both Puru and Lyndon said that there had been some noticeable missing faces at today's march with Far North Mayor John Carter away in Wellington after a meeting with ministers yesterday about the proposals.

"I'm not happy that the mayor himself has gone elsewhere, that finds that he's got no balls - and I have to be quite honest about that, you know.

"If you want to be leader of this area, of Te Tai Tokerau, face the people," Puru said.

Far North Councillor Moko Tepania was among several council representatives there to welcome the crowd. He hoped the government would listen to their message and make changes to the National Policy Statement.

"We're only one of the first districts that was actually going to be doing this but it will be rolled out nationally. The West Coast region has spoken up loud and clear that they oppose this, Northland region have said that today as well.

"I don't want to see it, in this form, in the National Policy Statement."

He said the council and government needed to do better to communicate with iwi and hapū on this issue in the future.

This was a kōrero tamariki at the march were keen to be a part of.

What was most important to them was attending the march and supporting the kaupapa together.

"I really hope they listen," one said.

"A lot of voices makes bigger mana," another said.