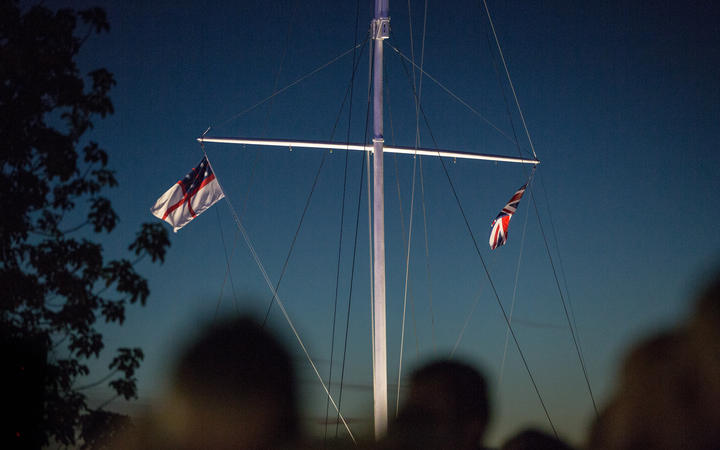 This flagstaff marks the spot where the Treaty of Waitangi was first signed on 6 February 1840. Photo: RNZ / Claire Eastham-Farrelly

They say it will also prompt schools to make closer links with hapū and iwi so they can teach local history and they are optimistic about its potential for influencing wider society.

Consultation on the draft curriculum ended this week, and the Education Ministry said it had received 4880 submissions.

The document becomes part of the core curriculum next year, meaning all children will study New Zealand history until the end of Year 10.

The principal of Manaia View School in Whangarei, Leanne Otene, said she advised the Education Ministry on the draft version and her teachers were already testing it in their classrooms.

She said one big area of change for primary schools would be the explicit teaching of colonisation and its effects.

"I think it's exciting really. I really believe that having a closer look at colonisation we can reflect on who we are and how we've evolved over time, you know the bicultural history of our country," she said.

"Our tamariki need to know those stories. It's a really good opportunity to explore those in a safe environment, to understand the wrongs of the past, the treatment of earlier times. Those times were those times, it's a really good chance for us to take a good look at them, explore them and also celebrate the great achievements also that have happened through the colonisation of New Zealand."

Otene said the subject would be part of the social sciences curriculum and it should not be hard for schools to include it.

The principal of Whangārei Intermediate, Hayley Read, said she had advised the ministry on resources teachers could use to teach the subject.

She said it was about time schools taught more Māori history.

Read said the curriculum would encourage schools to dig deeper into the history of local iwi and hapū.

"I think that's the exciting part, Māori will be very much part of the curriculum design in terms of what stories, what history is told," she said.

"My concern is that it becomes kind of like what we call a strand and becomes a tick box exercise and then is put away for a rainy day as a subject rather than as an overall curriculum approach."

A senior humanities teacher at Rautāwhiri Rotorua Girls High School, Karena Ngata, said teachers would need training and resources to introduce the curriculum and she worried some schools would not take it seriously.

"Just sort of adding it to the existing social studies curriculum, I worry that it won't be able to be taught with integrity if it's just like an add-on," she said.

Ngata said the curriculum should strengthen students' critical inquiry and literacy skills and she was looking forward to teens enrolling in senior history classes with much better history skills and knowledge.

She said some students knew very little at all.

"It's woeful, it's really woeful. It's sort of a double-tragedy because our Māori students are quite alienated from their culture, quite alienated from their own histories, many of them, obviously not all of them. For example in my Year 11 class they have an option of studying about their own waka, well they can't find out what waka they whakapapa back to," she said.

The president of Te Akatea, the Māori principals' association, Bruce Jepsen, said the effect of teaching New Zealand history in all schools would go beyond the classroom and into wider society.

"It represents an opportunity for ākonga, teachers, leaders, our whānau and our wider community to understand our past and how it's shaped our present reality, but I think more importantly how we might create a more equitable and socially just future for all of our people and I'm just going to reference tangata whenua and tangata tiriti, so all of our people," he said.

He said the curriculum would raise awareness of events that created to inter-generational cycles of disadvantage for Māori.

"Many of our citizens in Aotearoa both young and old they are not aware of that all, they have nothing in their consciousness or awareness about that so that's an opportunity to first understand those significant inequities, becomes a part of piecing together the puzzle of improving on the situation," Jepsen said.