A crowd of hundreds conducted a pōwhiri to mark the inaugural Kiingi Tūheitia Portraiture Award exhibition in Wellington. 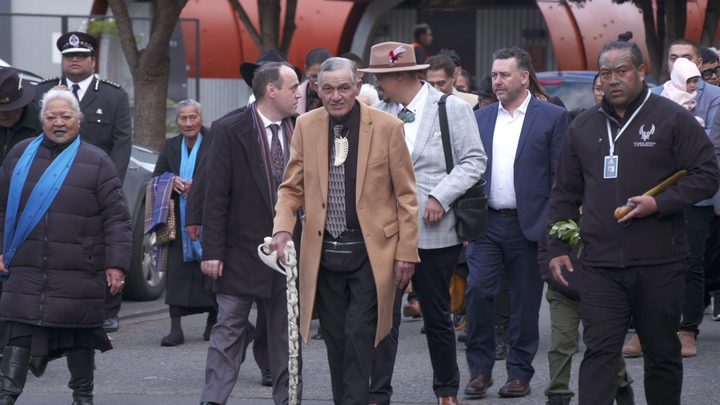 Kiingi Tūheitia attended the inaugural ceremony on Thursday. His spokesperson said the award created a special opportunity for mokopuna to depict the whakapapa of their tūpuna and share their stories. Photo: RNZ / Samuel Rillstone

The award aims to encourage and support the next generation of Māori artists to pursue their aspirations in the realm of mahi toi (art).

The competition attracted works by 128 Māori artists on this year's theme of tūpuna.

The collaboration between the Kiingitanga and the New Zealand Portrait Gallery started late last year, and has seen a range of unique art pieces including whakairo, sculpture, painting and photography submitted to the judging panel.

Artist Lisa Reihana, well-established and respected in Aotearoa and internationally, was one of the judges, along with Sir Derek Lardelli and Kura Te Waru Rewiri.

Reihana said the heartfelt effort behind each artwork was a great reminder of the values and matauranga that Māori carry.

"I think there's a lot of tenderness and care, and I think just that love that Māori as a people [have].

Bodie Friend from Waikato was announced the winner for his photograph depicting his tūpuna - his great-uncle Pat. 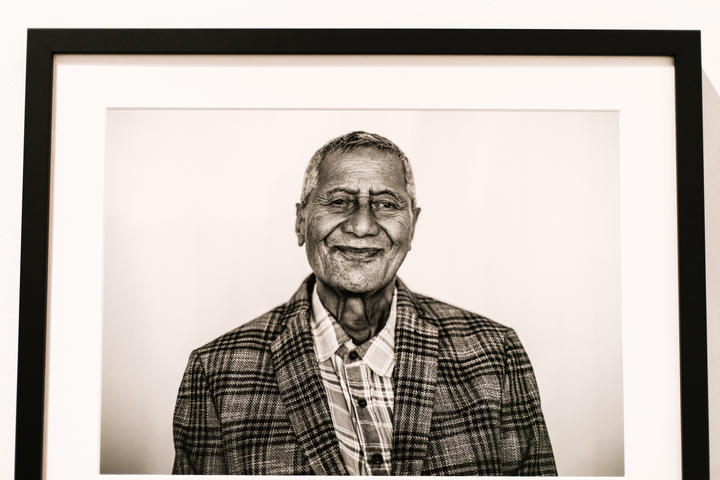 He said it was overwhelming to be named the inaugural winner and he was humbled to be able to share his taonga among dozens of others in the gallery.

"In terms of the art and the photography, for me it was personal because it had created a connection for me, not just to him [his tūpuna] but to my wider whānau, so that alone was cool.

"And then to be awarded or to be the inaugural winner is just overwhelming to be honest."

Of the initial entries, 49 were chosen to be a part of the final gallery exhibition.

Acting gallery director Brian Wood said the partnership with the Kiingitanga had connected the two sides and together they had helped push the boundaries of portraiture art and toi Māori.

"We really wanted to align with the kaupapa of the Kiingitanga which is about emerging Māori artists and giving them a platform to showcase their talent and also to create works of their tūpuna which means they research their whakapapa.

"We've made some amazing friendships as well on this journey."

The distinct Te Ao Māori kaupapa of the award has meant that the theme of tūpuna has invited Māori narratives and artistry to be intertwined.

Māori King spokesperson Rāhui Papa said the award created a special opportunity for mokopuna to depict the whakapapa of their tūpuna and share their stories.

The award was aimed at helping to unite and enhance people's spirits following lockdown last year.

"Every one that was submitted has their own story," Papa said.

"They've had to carry the weight of their whānau, of their hapū and of their iwi in their time and its actually an awesome example for us as we move into a post-Covid situation or context that we can do anything because our tūpuna have already trod the path," he said.

Friend hoped other emerging artists would use their creativity for storytelling and continue to share them for the future generations to come.

"For every Māori that tells their story it becomes apart of a bigger network of Māori storytelling that just enriches what we're doing moving forward within society."

The Kiingi Tūheitia Portraiture Exhibition will tour Aotearoa for the next two years, before a fresh competition begins.