The Māori Arts curator who resigned unexpectedly after putting together Auckland Art Gallery's largest exhibition of indigenous work, is calling on arts institutions to be better at sharing power. 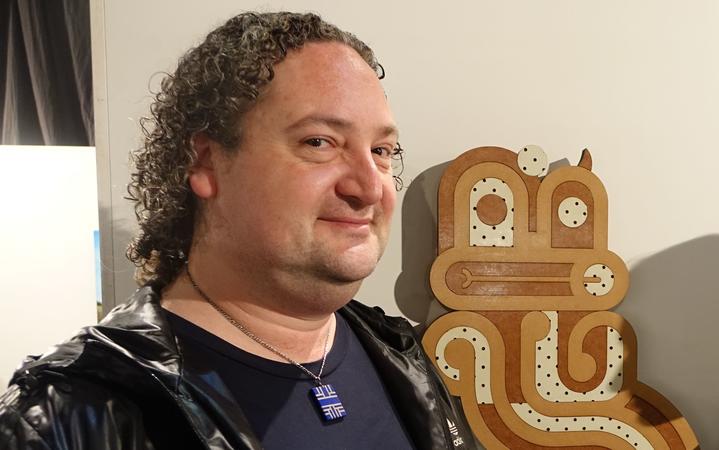 Nigel Borell says there are challenges when it comes to allowing Māori to have authority over their works. Photo: RNZ / Laura Bootham

Nigel Borell has claimed "major issues" over the level of control he had surrounding his landmark exhibition Toi Tū Toi Ora.

He said ensuring diversity was still a challenge for all arts institutions.

Borell's resignation was a shock to many, as he had a pioneering role in exhibiting over 300 pieces of indigenous art pieces by more than 100 artists in Toi Tū Toi Ora.

Nigel said that sharing power with the director was hard. There were challenges when it came to allowing Māori to have authority over their works and for Borell being able to lead in decision-making.

"We want to do it ourselves."

He said power is constructed to support colonial ideals and institutions, and not necessarily the diversity of people in Aotearoa.

"For Māori historically, that's a challenge and an issue that we constantly are unpacking, addressing within institutions."

Borell added that it was not a new hurdle for Māori and people of colour working within the art world.

Borell (Pirirākau, Ngāi Te Rangi, Ngāti Ranginui, Te Whakatōhea) was appointed to the role of head Māori art curator in 2015 following the resignation of Ngahiraka Mason, who held the position for 20 years.

He is the creative mind behind Toi Tū Toi Ora, the largest exhibition in the gallery's 130-year history, which was nearly five years in the making. He pitched the idea for the exhibition in his job interview for the role in 2015.

It has been two decades since the gallery's last major survey of contemporary Māori art, Pūrangiaho: Seeing Clearly in 2001.

The grand opening weekend of the exhibition from 4-6 December saw 5660 people attending. Although he was there, Borell had already resigned, stating he did not want to overshadow the opening and the importance of the artistic works.

Nigel said racism was part of all Māori experiences within Aotearoa, not just at the Auckland Art Gallery.

"I think that's the bigger picture we need to acknowledge, that while some of this could be looked upon as quite upsetting and devastating, it's actually a snapshot of what we're all dealing with within our own institutions and our job vocation," Borell said.

Preliminary raw data from Auckland Art Gallery showed the Māori audience doubled from 7 percent in October to 14 percent by the end of last month.

"One of the things we try to combat often is how we maintain our voice and visibility and the authenticity of that from our own perspective whilst in those institutions," Borell said.

He said these institutions were often biased and "colonially challenging".

"It's always a tricky task when you're trying to navigate the landscape while also trying to illuminate it at the same time."

Photos on social media from the opening of Toi Tū Toi Ora, showed people donning badges in support of Nigel Borell. They said "NB" for Nigel Borell and "Not today coloniser" underneath.

Auckland Art Gallery would not cite any existing issues that led to Borell's resignation, saying that he resigned of his own accord and gave standard notice. They said they supported him in his future ambitions.

"This is expressed in our Māori responsiveness plan and organisational values.

Lacy added: "We actively work to make visible te reo Māori within the gallery, we have bilingual wayfinding, all materials for Toi Tū Toi Ora are bilingual, and we support staff with te reo classes for front of house and leadership teams. Over the last year we have introduced 16 new roles dedicated to Māori, from front of house positions, education, public programme positions to curatorial internships."

Auckland Art Gallery said there had been no reported incidents of staff experiencing racism over the last five years during Nigel's employment.

Since the first of its 11 directors was appointed in the 1950s, only two New Zealanders have held the role.

Kirsten Lacy is Australian and was appointed to the role in 2020. She is a former deputy director at the National Art Gallery of Australia, where she worked touring a major exhibition of indigenous work by Aboriginal and Torres Strait Islander artists to Berlin and New Delhi in 2018.

Lacy has also been running a new digital series called Cultured Conversations, in which she speaks to leaders in culture, arts, philanthropy and politics about how institutions can adapt and innovate.

"We have directors, curators, art institution experts, that have great expertise and institutional knowledge and cultural knowledge in the arts landscape.

"We are continually building the expertise and opportunities of international appointments, it's about time we start putting some of that energy into our own arts infrastructure here in New Zealand and the very capable applicants and participants that exist in our own arts landscape."

Nigel Borell said he still had a good working relationship with the Auckland Art Gallery and would be moving on to work as a trustee and curator for the Wairau Māori Art Gallery in Whangārei, which would open later this year.

"The first in the country where Māori curators and artists will be profiled and presented in this gallery space."

He is presenting the second show, which will take place next year.