Māori Party co-leader Rawiri Waititi has been booted out of Parliament's debating chamber after refusing to wear a tie, in contravention of the rules. 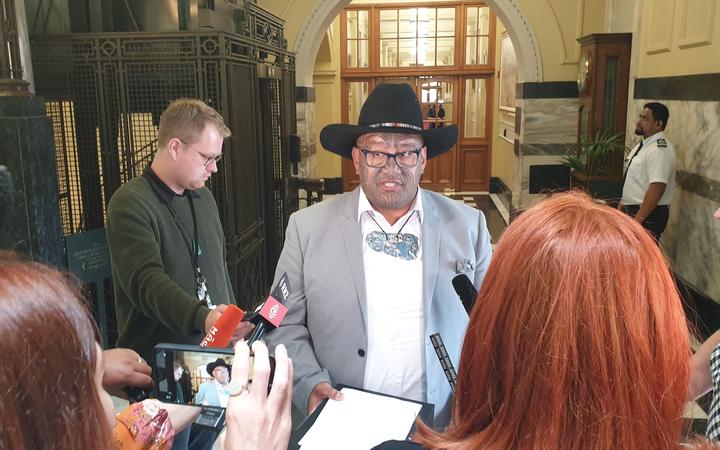 Rawiri Waititi speaks to reporters after being thrown out of Parliament. Photo: RNZ / Katie Scotcher

Speaker Trevor Mallard last year announced he would reconsider the requirement, saying he himself believed the tie rule to be outdated.

He ultimately ruled however that the dress standard would remain as that was the will of the majority of MPs.

On the first sitting day of 2021 today, Waititi arrived without a tie. He argued that he was wearing Māori business attire with a taonga around his neck, but Mallard said he was not convinced by that argument.

Mallard noted the Māori Party did not respond to the review of the dress code.

Waititi made several attempts to speak in the debating chamber, despite Mallard's order, and was ejected from the house.

After being removed from the debating chamber, Waititi said not being able to wear a taonga around his neck instead of a tie was a breach of the rights of indigenous people.

"That is not part of my culture, ties, and it's forcing the indigenous peoples into wearing what I describe as a colonial noose," Waititi said.

When asked if he would wear a tie at Parliament tomorrow, Waititi said "you'll have to wait until tomorrow".

"Our people have worn these types of ties for generations, thousands of years. And it's time that Parliament, which was consented by my ancestors through Te Tiriti o Waitangi, recognised our right and freedom to express our own cultural identity, in a place that's supposed to be a place for democracy," Waititi told Checkpoint.

"If you see the way I was dressed it wasn't disrespectful, it was actually I think quite smart. I own to two consultancy businesses, and also our farming business on our family farm. And I never wear a tie," he said.

"I will wear a tie when I want to wear a tie. But I will not be forced to wear it.

"I will not be forced to be wearing anything that I shouldn't be wearing… Why are Pākehā making Māori dress like they want us to dress?"

The enforced dress code is hypocritical and an example colonial ways that suppress tangata whenua, he said.

"Parliament should be a place where we could freely practice our democracy and represent the people that voted us in.

"The majority of the people that voted me in are not business attire people… Let's cut the myth that everybody must wear ties. I've been overseas and met with corporate people all over the world. None of them wear ties, they're open-collared suit-wearing people, because ties are now outdated."