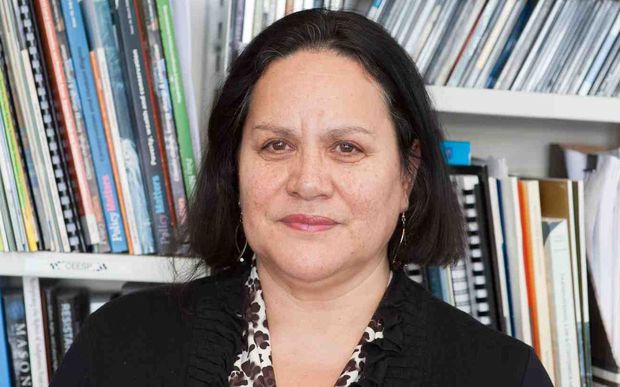 Aroha Mead says the process has not been respectful. Photo: Victoria University

It comes after two non-Māori artists were heavily criticised on social media, one for selling portraits of wahine with moko kauae without their permission - and another, for painting a full-faced moko on a monkey statue.

Broadcaster Oriini Kaipara (Tūhoe, Tūwharetoa, Ngāti Awa, Ngāti Rangitihi) was alerted to an artist selling a portrait of her face with her moko kauae.

"I know my kanohi [face], I know my moko [kauae], and then I saw a price tag on it and my blood boiled," she said in a livestream on her Facebook page.

"To me it was wrong, because I had never heard from her or heard of her - the lady, the artist in question - and I just felt really disappointed that she didn't have the courage to ask me."

Kaipara said she reached out to the woman, who eventually apologised to her.

The artist, Samantha Payne, said in a statement to RNZ that "having been enlightened by those that have taken the time to educate me, I completely understand the reaction."

"I would like to apologise for any offence and hurt caused by my paintings, specifically in relation to the Tā moko," Payne said.

"I did not seek permission first to paint these beautiful women and that is inexcusable and ethically wrong."

Former children's television host Erin Simpson has also apologised, after she said she had received "accusations" of cultural appropriation in some of her previous artwork and designs.

An image of a monkey with a full-face moko drawn on, and a feather cloak, or korowai, has been circulating on social media, which Simpson said, was a piece commissioned in 2016 "to celebrate a range of cultures coming together collectively" for Chinese New Year.

"With this type of art, I firstly look to things like trademark laws and copyright agreements, it's never my intention to break any laws, hurt people or go against Māori sacredness," she said.

"Moving forward, I will be looking to take a more culturally conscious stand on what I create and how I present future designs."

Mead said it was disappointing but not surprising that Māori were continuing to fight against their cultural symbols and images being used without acknowledgement.

"What we find is when we do contest these cases is that the artists simply didn't know, they're genuinely sorry ... and they stop immediately and are horrified at the idea that they could be seen as being racist," Mead said.

"But for every one [person] you are able to teach, there's [another] 15 right behind them, prepared to make the same mistake."

She said non-Māori artists simply needed to ask the Māori they were seeking to depict for permission, or the hapū or iwi whose designs they were wanting to use.

"It is really that simple, it's not complicated."

She said that while the law allowed Māori to contest trademarks if they deemed them offensive, there was no legislation to govern the use of Māori cultural expressions.

She said the WAI 262 claim, which the government has announced a framework for dealing with, aimed to address this.

"Unfortunately, it does mean that it comes down to Māori having to protest, and contest every individual on a case-by-case basis [but] we don't want to have to sustain that though, we'd much prefer to see a law in place."

She said that while there were protocols in place to protect the use of specific whānau or hapū tā moko designs, she wanted this put into law.