Whānau in the East Coast have been digging into their own pockets to provide food and financial support to those affected by major logging disruption in the region. 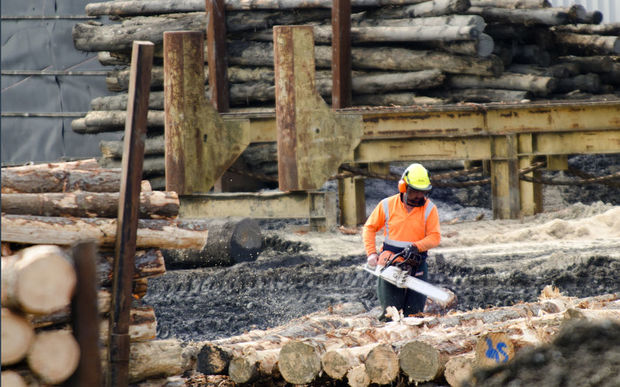 About 300 forestry workers have lost their jobs or have had hours reduced due to the impact the coronavirus is having on logging exports to China.

Gisborne exports about 95 percent of the region's logs to China, but its ports have now reached full capacity.

Te Aroha Kanarahi trustee Ani Puru-Huriwai said the community was doing everything it could to help whānau.

"We have a food bank and we've asked whānau who live in Gisborne and those who live away from home who whakapapa to us to send donations of kai or money home," she said.

"A number of artists have contributed pieces art pieces to support that kaupapa, such as Robin Kahukiwa and Mark Kopua and others who have donated. We're really thankful for that."

She said the trust was also working closely with Work and Income to get staff members on the ground in rural areas too.

"WINZ is not typically up the northern end of the East Coast," she said.

"They have one office in Ruatoria and another in Gisborne, which for our families in the North is an hour's drive to Ruatoria one way or forty minutes.

"That's a lot of petrol when you don't have any money. The agencies are coming out to our rural communities and we're working with them to make sure there's no stand-down period for our whānau who are affected."

Labour MP Kiritapu Allan said a $4 million government fund announced this week would help alleviate the financial strain for businesses in the region.

Allan said an outpouring of support from local people had been overwhelming.

"One thing I'm extremely proud of and always am proud of is the way Te Tairāwhiti bonds together in times of need," she said.

"As soon as they realised that Covid 19 was going to have a significant impact on whānau, the regional leadership of our town has pulled together, have been hosting whānau up and down the coastal wellbeing centres, and there's been resources redirected from companies directly into whānau."

Moni Ora, which provides financial advice in Gisborne, has been inundated with calls.

Manager Linda Markie said it had been unusual seeing so many forestry workers get in touch.

"These people are used to being independent, they've always worked and they would not be the people who would usually come in to the service but to lose your complete income, that's just a crisis that people don't normally have to deal with.

"We have been working with them to negotiate with creditors and have a look at their hardship options."

Wade Brunt has been working in the logging industry for the last 18 years.

He is doing his bit to help through his wellness initiative, Jogging for Logging.

"It's concerning for a lot of my friends because its uncertain how they're gonna pay their mortgage next week," he said.

"With my training we just get together, do some exercise, and then we just share our problems and how we can all support each other. I also try to pass them on to these other support services, because a lot of them are reluctant to go into WINZ or access any other support like that."

He wants to encourage anyone affected in his community to come forward and ask for help.