Te Arawa people are celebrating the return of Lake Ōkaro, a century after they lost control of it. 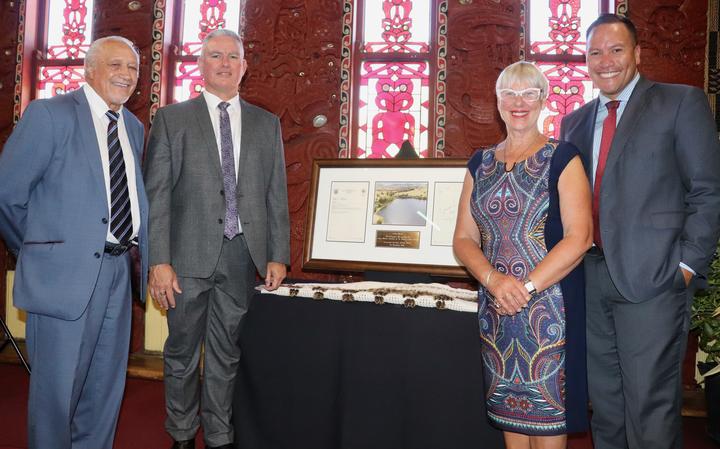 Māori Crown Relations Minister Kelvin Davis made the formal announcement at Te Papaiōuru marae in Rotorua this morning with the people of Te Arawa and the Rotorua District Council.

The transfer of the southern Bay of Plenty lake to the Te Arawa Lakes Trust completes the final part of the Rotorua iwi's settlement, which has taken 14 years to enact.

Agreement on moving forward was reached between the trust, the Crown and the Rotorua Lakes District Council in 2014 but Davis said it took a long time to sort out the technicalities.

"Finally this day has come, it's better late than ever, but it's a wonderful day.

"Now Te Arawa has a say in what happens to these tāonga that have been part of Te Arawa's identity for hundreds and hundreds of years, and finally this day has arrived for them."

Davis said the lake would still remain open to the public, but under a co-governance arrangement between the council and Te Arawa, any commercial activity around the lake would require iwi input.

Te Arawa Lakes Trust chair Sir Toby Curtis said the co-governance model allowed the iwi to apply a Māori perspective to the use and care of the lakes.

"While Te Arawa owns it, Te Arawa and the community are responsible for its future use and future sustenance."

He paid tribute to those before him who had "fought to preserve the rights of Te Arawa as kaitiaki".

The return of the lake "was not the end" but "another strong beginning".

"It has brought us back in connection with all our tūpuna who have lived around the lakes and the whānau and the hapū," he said.

It was a "joyous" occasion for mayor of Rotorua Steve Chadwick, who said it would be an opportunity for iwi to improve the quality of the region's lakes.

"They way they look after their lakes and the combined lakes in our district comes from a lens of matauranga Māori so we understand the value of the biodiversity of the lakes and the very interesting ecology so the world is watching us about how we are looking after our lakes quality, the fish, the species there," she said.

Lake Ōkaro has poor water quality, but is deemed safe for recreational activities such as trout fishing and water-skiing.

It was formed about 700 years ago, and is the smallest of the Rotorua lakes at 31 hectares.