Repeated efforts to meet with the protesters occupying Ōwairaka have been rebuffed and it's clear there is a clash of worldviews, the chair of Auckland's Maunga Authority says. 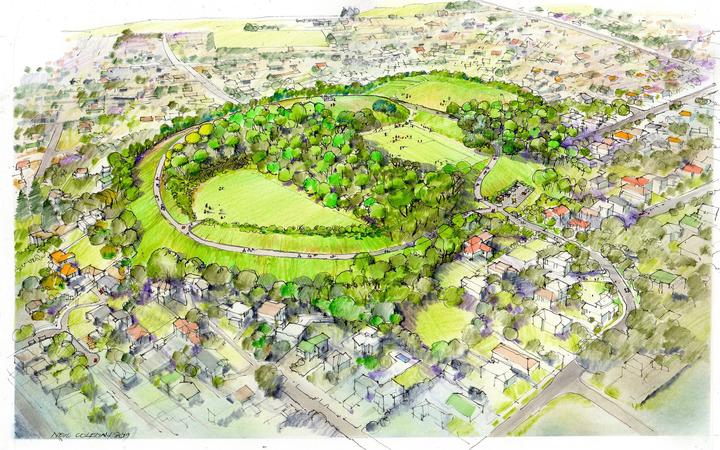 Those objecting to plans to remove 345 exotic trees and plant 13,000 natives have been camped out at the maunga for two weeks now.

The Tūpuna Maunga Authority is a result of the 2014 Ngā Mana Whenua o Tāmaki Makaurau Collective Redress Deed and as part of that Treaty of Waitangi settlement, 14 Tūpuna Maunga were returned to the 13 mana whenua iwi and hapū of Auckland.

The maunga are held in trust for the common benefit of the mana whenua and all other people in Auckland.

The small group protesting the removal of non-native trees claims the authority has been manipulative and been difficult in setting up a meeting with them and said they would not be attending a public hui tomorrow on Ōwairaka.

The protesters said they felt they had been backed into a corner and would not be going.

However, Maunga Authority chair Paul Marjurey said the hui arrangements have become a 'he said, she said' situation and despite the group saying they would not attend he still hoped to clear the air at the hui - and invited anyone who would like to attend to come along.

"We are more than happy for folk to look at the clear email correspondence that shows on the three dates that were put up they weren't accepted by the protest group - and now it seems we have descended into conspiracy theories around that somehow this has been set up to place them as the victims. I've had one person tell me that they think somehow we are going sneak chainsaws and helicopters on to the back of the whakawātea in the hui - it's all gotten really bizzare."

Mr Majurey said it had become clear that it had become not about trees or protecting nesting birds, because those allegations had been clearly debunked and there had been independent ecological experts in support of the programme and council consent granted.

"I think it comes back to worldviews and philosophies and somehow this group considers that there is some negotation going on over what they think they can control.

"If we think about what has been quarried and destroyed over time on these maunga - there has been commentary that this is somehow revenge of that."

He said the authority's stance was about a long-term worldview that reflected the history of the ancestral landscapes and an articulated vision in terms of restoration of native flora and fauna - with aspirational goals of bringing Kiwi back.

Mr Majurey said it would be sad if the protest group did not attend tomorrow's hui, but it would not mean there could be no ongoing discussions.

"More importantly this is not a negotiation, it is not a case that a relatively small group of protesters get to prevent the lawful authority and work of Tūpuna Maunga Authority in fulfilling its statutory role."

He said no one wanted to see the police having to come in to clear the way for the work to continue and so the authority had been quite careful of its approach - but at some point the group had to make a call about what they were trying to achieve.